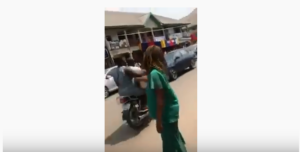 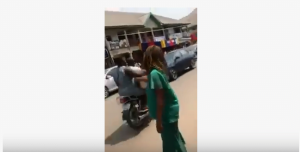 A woman has allegedly ran mad in Sapele area of Delta State after she was reportedly dropped off by some unknown face suspected to be ritualists.

According to a report given in pidgin language, the woman who is known to be into ‘call girls’ kind of business was seen wandering about on the Kolo street, in Sapele after she was reportedly dropped off from a car.

The report had it that she was left with money, totalling two hundred thousand naira, including an iPhone which was said to have been taken away by some street boys.

It was said in the report that the woman is well known at a joint in the area where she hustles for a leaving doing ‘call girls’ kind of business.

However, she started displaying madness after the men in the car dropped her and runoff.

This was coming a few days after Naija News reported that Presidential Villa Director, Laetitia Naankang Dagan, who was an Assistant Director in Aso Rock, Nigeria’s Presidential Villa in Abuja, the nation’s capital, was murdered by ‘Yahoo boys’ after the police allegedly betrayed her.