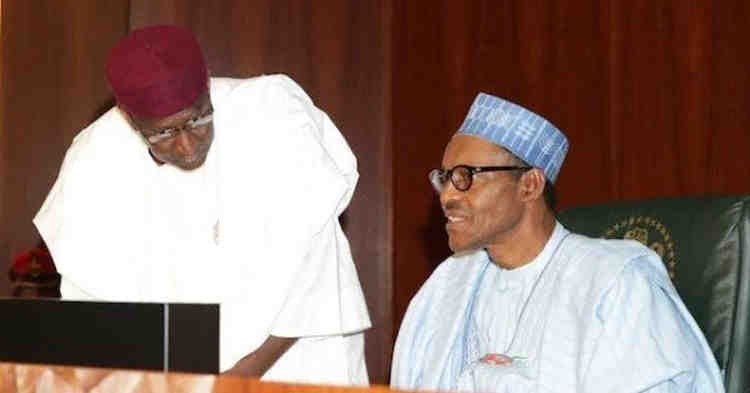 Leader of the outlawed Indigenous People of Biafra (IPOB), Nnamdi Kanu, says the unknown whereabouts of Abba Kyari, the Chief of Staff to President Muhammadu Buhari, confirms his allegation that Jubril Al-Sudani from Sudan is in charge of Nigeria.

Concise News reports that Kanu, in his latest claim, alleged that President Buhari’s face was wrongly “fixed” before Sunday’s broadcast on coronavirus in the country, adding that Kyari would have prevented the “mistake” if he was not sick.

Kyari is one of the top government officials that have tested positive to the contagion. It is understood that the chief of staff to the president is being treated at an undisclosed location in Lagos, southwest Nigeria.

In his report titled: ‘Buhari’s speech, the greatest fraud of the 21st Century anywhere in the world,’ Kanu wrote: “IPOB set a very clever trap for them and they stupidly stepped on it as we knew they would.

“Under the careful supervision of Abba Kyari, they cleverly packaged and choreographed Jubril’s public appearance by deliberately avoiding any live interviews or visual broadcasts until the Cuba video emerged.

“But we persisted, hassled, harassed and kept chasing the cabal until they made that one fatal error in Cuba that unravelled their fraud.

“It was IPOB’s relentless pressure, the incendiary tweets from @Imamofpeace and a well-crafted article by the former US Ambassador to Nigeria John Campbell, brilliantly wrapped in diplomatic language, that smoked out the lousy impostor.

“To appreciate the extent and depth of their deception, kindly zoom in on the pictures extracted from Jubril’s Cuba broadcast to see clearly for yourself the monstrous double eyelid, double eyebrows and hole in the neck on the creature that resembles something out of a Hammer House of Horror movie that gullible people unintelligently refer to or call Buhari.

“I challenge anybody with a smartphone, a functioning brain and a pair of eyes to zoom in on any of the photos shared by Femi Adesina of Jubril’s broadcast and not be ashamed at what Fulani cabal has done to their brain and democracy in the great Zoo called Nigeria.

“I bet the puppet master Abba Kyari never knew a tiny innocuous and invisible virus would have incapacitated him long enough for the Buhari plastic mask they moulded to fall off the face of Jubri Al-Sudani. This is the greatest fraud of the 21st Century anywhere in the world. A rape of democracy and total disregard for constitutional government.

“Garba Shehu and his Alimajiri followers will say, ‘it doesn’t matter if it is Jubril or Buhari, the issue is, we must finish our 8 years in power. We can’t allow what happened to us with Yar’adua to happen again’.

“Now the world can see why Nigeria is the greatest Zoo on earth.”

CHECK IT OUT:  Lagos State Govt Takes Over The Land Of Collapsed School, Begins Massive Demolition In Lagos