Video: Lady kicked out of Chinese restaurant for being a foreigner while her Chinese family eat inside
Skip to content 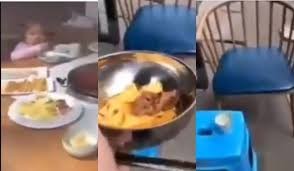 After several reports that Chinese having been maltreating foreigners over coronavirus pandemic, a lady has shared how she was allegedly kicked out of a Chinese restaurant for being a foreigner while her family who are Chinese are allowed to eat inside.

According to her, a sitting area was later created for her away from the thrash, still outside the restaurant but now she could see her family. She claims she was also given a bowl where her food was served.

In the video, the waiter could be seen serving the meal for a child while he passed some from the door into her bowl.

Lady ALLEGES she was kicked out of a Chinese restaurant for being a foreigner. pic.twitter.com/XmR8vfPVjI