Unfair To Blame Me For Loss To Italy – Eguavoen - NaijaCover.Com
Skip to content 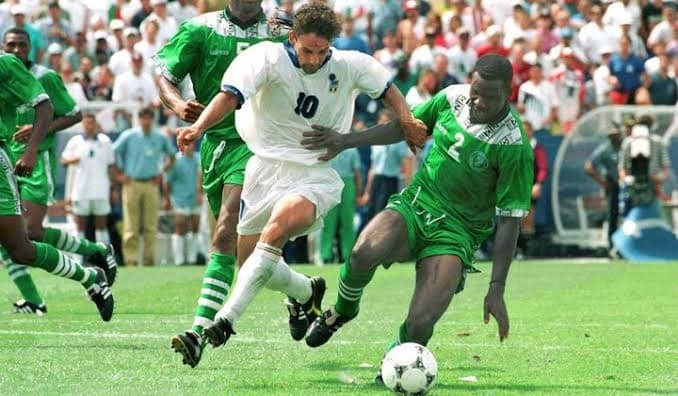 But the then-national team right full-back, Augustine Eguavoen wants fans to stop blaming him for the team’s ouster despite conceding the extra-time penalty that sent the Super Eagles crashing out of the tournament at the hands of Italy.

The then-reigning African champions, only making their debut at the global showpiece, were the pre-match underdogs against the former world champions, despite making it to the Round of 16 clash as Group D winners.

A first-half strike from Emmanuel Amuneke handed Nigeria the lead before a second-half red card to Gianfranco Zola reduced the Europeans to ten men and brightened the Africans’ chances of victory.

However, with a quarterfinals ticket moments within the Super Eagles’ reach, a momentary loss of concentration allowed Baggio to steal in and equalize.

And late in the first half of extra time, defender Eguavoen obstructed Antonio Benarrivo in the danger area, forcing the referee to point at the spot.

Italian playmaker Baggio once again stepped up to convert the spot-kick, breaking millions of Nigerian hearts to send Italy through.

That error, etched in many memories, remains one of the legacies left behind by Eguavoen, but the former Gent star insists it was not deliberate.

“And I think that (being blamed for conceding the penalty that led to Italy’s winner) is very unfair,” the 1994 AFCON winner told the Vanguard.

CHECK IT OUT:  Lyta – Birthday Wish

“Many Nigerians believed that if we had defeated Italy, we could have gone all the way to win that World Cup.

“There was a bit of miscommunication between Chidi Nwanu and myself, and that led to (the concession of the) penalty.

“And the foul was not deliberate because (Antonio) Benarrivo anticipated the contact and waited for me to barge into him.

“I had my eyes on the ball and was not looking to foul him.”