Bundesliga: How Nigerian-born Stars Suffered, Celebrated At The Weekend - NaijaCover.Com
Skip to content 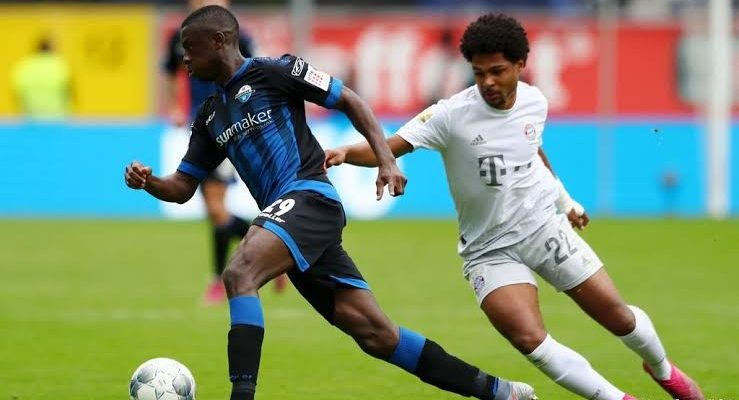 Super Eagles stars, as well as players of Nigerian descent, have been actively involved as the German top-flight seeks to bring the 2019-20 season to a proper conclusion.

A lot is still to be decided at both ends of the table.

But the title race appeared all but over when Bayern Munich established a seven-point advantage over Borussia Dortmund with a slender victory at the Signal Park in midweek.

Joshua Orobosa Zirkzee didn’t feature in that game. But the young Dutch-Nigerian striker picked up his seventh cap of the season on Saturday when Bayern confirmed their league superiority with a 5-0 trashing of Fortuna Dusseldorf.

At the other end of the league table, Paderborn were thoroughly dealt with by Dortmund on Sunday, with a 6-1 humbling making Jamilu Collins and teammates look like silly schoolboys.

Union Berlin and Anthony Ujah were sucked back into the troubled relegation waters on Sunday after receiving a harsh 4-1 lashing at the hands of Borussia Moenchengladbach.

Ujah was thrown into the game with ten minutes left to play, and the scores still at 3-1, but the Nigerian forward could wreak no magic at the Stadion im Borussia-Park.

Compatriot Suleiman Abdullahi was on the bench throughout for the newly-promoted side.

Augsburg remain just four points above the relegation waters as the duo of Noah Bazee, and Felix Uduokhai could not help the visitors avoid falling to a 2-0 defeat to Jordan Torunarigha’s Hertha Berlin at the Olympiastadion.

All three are German-born youngsters who are still eligible to represent Nigeria at the international level.

At the OPEL Arena, Liverpool loanee Taiwo Awoniyi logged ninety minutes for the first time since his move to Mainz last summer.

But the Super Eagles hopeful had a goal disallowed as the home side succumbed to a 1-0 loss to Hoffenheim courtesy of Ihlas Bebou’s 43rd-minute strike.

Hoffenheim introduced former Germany U20 skipper Kevin Akpoguma at halftime of the encounter for his 16th league appearance of the 2019-2020 season.

More would be expected of the young striker, though, as Hoffenheim go head-to-head against Wolfsburg for the last Europa League ticket.

RB Leipzig’s Champions League hopes took a significant hit last Wednesday when Ademola Lookman conceded the penalty that deprived the hosts of all three points in a 2-all draw with Hertha Berlin.

The former Everton speedster will be looking for another chance to make amends when Leipzig make the trip to Kingsley Ehizibue’s Cologne on Monday.

With five more rounds left to the end of the campaign, there’s still a lot to fight for and look forward to in the German top division for these Nigerian-born stars.