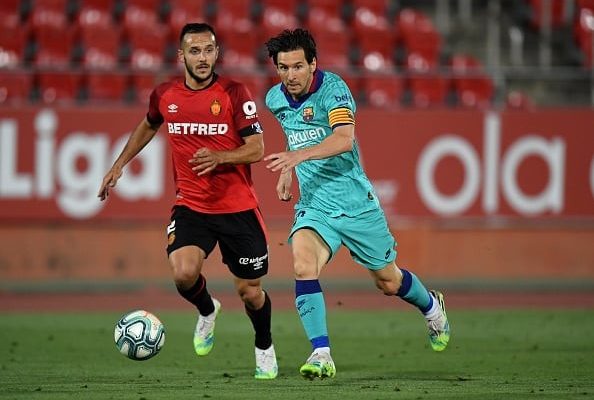 Lionel Messi was in thick of things as Barcelona returned to La Liga action with a comprehensive win over RCD Mallorca at the Visit Mallorca Estadi on Saturday night.

Messi’s man of the match performance would not have been pleasing to watch for Ronaldo fans who saw their man miss a penalty in the Coppa Italia Semi-Final clash against AC Milan on Friday night.

It did not take long for Barcelona to get going as they took the lead inside the opening two minutes courtesy of an Arturo Vidal’s header.

The Chile international headed home the first goal following a cross from Jordi Alba. Vidal’s goal was a sign of things to come, and eight minutes from half-time, Barcelona doubled their lead through Martin Braithwaite.

The Denmark star fired home with his right foot for his first goal since he joined the champions from Leganes in February.

His goal ensured Barcelona took a comfortable lead into the break. The second-half followed a similar pattern and Braithwaite could’ve added a second, but was denied by the legs of Manolo Reina in Mallorca’s goal.

However, Barcelona would not be denied their third goal, and this time it came from the boots of Jordi Alba who slotted home after being set up by Messi.

Messi then got on the act as he fired home Barcelona’s fourth and his 20th league goal of the season in added minutes.

With his goal, the Argentina international became the first player to score at least 20 goals in 12 consecutive seasons.

20+ – Lionel Messi is the only player to score 20+ goals in 12 consecutive @LaLigaEN seasons:

The win means Barcelona are well on course to defend their title as they are now five points clear of Real Madrid who play Eibar on Sunday.

CHECK IT OUT:  Revealed! How Women Used Their Own Menstrual Blood To Stop Soldiers During Election In Rivers