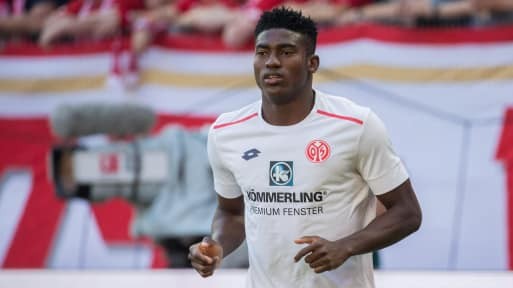 The 22-year-old has enjoyed some sort of redemption since the Bundesliga returned, but he has now suffered a setback in Die Nullfünfer’s loss to Augsburg on Sunday afternoon

It was a bad day at the office for Taiwo Awoniy as he was stretchered off in Mainz Bundesliga clash against Augsburg at the Opel Arena.

Florian Niederlechner’s opening minute strike gave the visitors the victory, but Mainz will be more concerned about the state of Awoniyi despite the disappointment of losing at home.

The former Golden Eaglets star was handed another start, but he only featured for twenty minutes as he had to be taken to the hospital following a clash of heads.

The severity of the injury is still not known, but it’s a massive blow to Awoniyi who is finally enjoying his time in Germany.

Taiwo #Awoniyi has been stretchered off injured following a nasty collision

The Nigerian joined Mainz on loan from Liverpool last summer, but he struggled initially and was limited to just six appearances before the German top division was suspended due to the coronavirus pandemic.

However, he’s enjoyed more playing time since the league returned last month, and just recently Mainz sporting director revealed the club have been impressed with his performances, and are considering taking him permanently from Liverpool.

But with his latest injury, Mainz could now have a change of mind, especially if it’s too serious.

CHECK IT OUT:  [Lyrics] Victor AD – Too Much Money