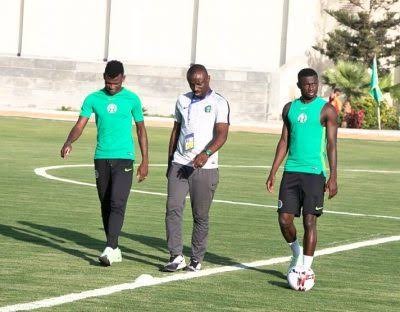 Paderborn’s relegation from the Bundesliga was confirmed on Match Day 32, but Jamilu Collins is not willing to play in German’s second division

Super Eagles fullback Collins is ready to dump Paderborn and move to a better club if the right offer appears during the transfer window, according to the player’s representative, Thomas Solomon.

Collins, one of coach Gernot Rohr’s favourite defenders, was Nigeria’s first-choice left fullback to the 2018 FIFA World Cup and the 2019 African Cup of Nations tournament.

He also saw action for the entire duration of the friendly tie between Nigeria and a Neymar-inspired Brazilian side last year.

The Super Eagles earned an impressive one-all draw, though Neymar was substituted in the first half after cupping an injury.

At the club level, Collins was equally a vital member of the Paderborn squad that secured promotion from the Bundesliga 2 last year.

However, despite appearing in 28 of Paderborn’s 32 top-flight games this campaign, Collins could not help coach Steffen Baumgart’s men avoid relegation this season.

Paderborn won only four of their 32 matches to stay rooted to the foot of the Bundesliga table with 20 points.

Solomon, though, believes the 25-year-old has mastered his art and has garnered enough experience to star at one of Europe’s biggest clubs.

“Jamilu Collins is a Nigerian international who can boast numerous appearances (for his country). Neymar and his Brazil teammates had great problems against him,” Thomas Soloman told AreaNapoli.

“Collins has played almost all the Bundesliga games (this season) as a starter. He is 100 per cent ready for (a move to a big club).”

Newcastle were linked (via transfermarkt) with Collins in March, and the Nigerian defender would jump at the chance to join Alex Iwobi and Wilfred Ndidi in the English Premier League.