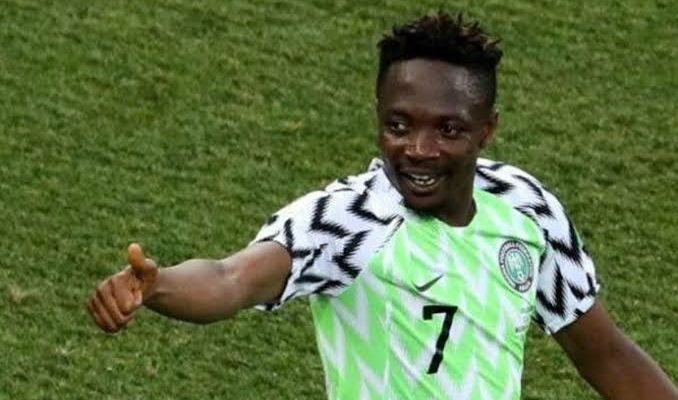 Nigerian international Ahmed Musa smashed in a memorable brace against Iceland exactly two years ago yesterday to elevate himself into an elite class of African marksmen to ever participate at the Mundial.

Egypt’s Abdulrahman Fawzi was the first African to register a goal at the FIFA World Cup, netting a brace in the Pharaoh’s 2-4 loss to Hungary at their debut in 1934.

Since then, the world has joined Africans in celebrating the goals of evergreen legends like Cameroon’s Roger Milla, Morocco’s Rabah Madja, Nigeria’s Rashidi Yekini, among others.

But who is Africa’s all-time top goalscorer at the FIFA World Cup? Soccernet.ng provides the answer.

The Teranga Lions also had fine attackers in Khalilou Fadiga, Henry Camara, and El Hadji Diouf in that incredible side that made it to the quarter-finals of the tournament.

But it was midfield powerhouse, Diop, having netted two more goals against Uruguay, who would depart Korea/Japan has the Mundial’s most prolific Senegalese.

The first of the two Cameroonians to appear on this list is a former Barcelona star, Samuel Eto’o.

A teenage Eto’o – the youngest participant in the championship – was part of the Indomitable Lions’ party to France ’98, but his first World Cup goal only appeared four years later. He netted Cameroon’s winner in the 1-0 victory over Saudi Arabia at the Korea/Japan 2002.

CHECK IT OUT:  “I Wanted To Raise Money To Release My Gang Member In Prison” – Suspect

The four-time African Footballer of the Year had to wait until the 2010 edition in South Africa to add to his tally. Etoo scored in Cameroon’s 1-2 loss to Denmark and also in the 1-2 defeat to the Netherlands.

Nigeria has had 17 different goal scorers at the World Cup, but Ahmed Musa’s name sits on top of them all.

Emmanuel Amuneke, Daniel Amokachi, and Kalu Uche were the only ones to have recorded two goals until the former Kano Pillars man debuted at the tournament.

In the following edition two years ago, the Al Nassr forward repeated the feat, scoring twice in the 2-0 win over Iceland – taking the seat many would have expected to see the great Rashidi Yekini on.

For many years, there was no African striker at the World Cup quite like the charming Cameroonian, whose exploits at Italia ’90 left many on the continent dancing and dreaming.

Undoubtedly one of Africa’s greatest ever, Roger Milla banged in four of his five WC goals at the 1990 World Cup in Italy, celebrating each one with an iconic dance routine around the corner flag.

Milla scored a brace each against Romania and Colombia to power Cameroon to the quarter-finals, the first African nation to get to that stage.

Four years later, he found the back of the net again versus Russia.  Aged 38, Milla became the oldest goalscorer in a World Cup tournament.

For two decades, no one could touch his goalscoring record until one of the most underrated Ghanaians in history came on to the scene.

Gyan is never mentioned in the same breath as renowned compatriots Abedi Ayew and Tony Yeboah. Still, the veteran forward has no rival atop Africa’s goalscorer’s chart at the World Cup.

The former Black Stars skipper opened his goals account against the Czech Republic at the 2006 FIFA World Cup.

At South Africa 2010, Gyan scored against each of Serbia, Austria, and the USA to take his tally to four.

But he was far from done, and in Brazil 2014, the Ghanaian striker breached the defence of Germany and Portugal for his fifth and sixth World Cup strikes.

And after 20 years, Roger Milla’s record as Africa’s highest scorer in the FIFA World Cup was smashed.