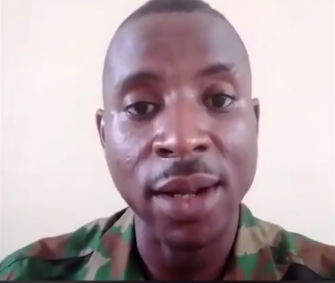 A Nigerian soldier has been arrested for blasting the Chief of Army Staff and other security chiefs in a viral video.

In the video, Lance Corporal Martins berated the Chief of Army Staff, Lt. Gen. Tukur Buratai, and other security chiefs in the country for not acting to stop the incessant killings of Nigerians by terrorists and armed bandits.

In the lengthy video, Lance Corporal Martins said the security chiefs have failed Nigerians. He condemned the security chiefs especially Buratai, and Chief of Defence Staff, General Abayomi Gabriel Olonisakin, for not being committed to ending the incessant killings of Nigerians by terrorists and armed bandits.

He alleged that the military ordered the illegal detention of some soldiers, who demanded better weapons and ammunition to combat Boko Haram and other terrorist groups in the country.

He acknowledged that he might be arrested and probably killed for the video but said he is ready to sacrifice himself for the country.

CHECK IT OUT:  Ubi Franklin’s 3rd baby mama blasts him publicly, reveals he has never met their child (Video)