Utaka Back With A Brace; Saka’s Arsenal Zoom Into FA Cup Semis - NaijaCover.Com
Skip to content 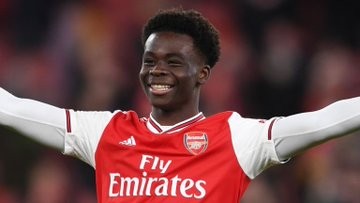 A goal in each half from Nigerian forward Peter Utaka secured a fine 2-0 win for Kyoto Sanga over Jubilo Iwata at the Sanga Stadium early on Sunday morning in Japan.

The former Super Eagles attacker broke the deadlock just before the half-hour mark and he added his and the game’s second minutes into the second half.

It’s Kyoto’s first win of the two-week-old J2 League after suffering a 1-0 loss at Renofa Yamaguchi during the season opener last weekend.

36-year-old Utaka, who last played for the Super Eagles in 2013, is rolling back the hands of time after netting 21 goals in 41 games last year for Ventforet Kofu also in the J2 League.

In the FA Cup, Bukayo Saka was once again in Arsenal’s starting lineup as the Gunners carved out a 2-0 win at Sheffield United on Sunday afternoon.

CHECK IT OUT:  Ronaldo Scores On His Return From Injury