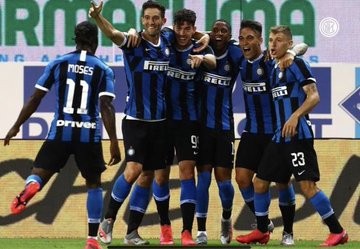 The Nigerian joined the San Siro giants on a loan deal in January, and it is expected to expire at the end of this month

Inter Milan are still hoping they can reach an agreement with Chelsea to extend Victor Moses loan deal at least until the end of the season.

Moses joined the Nerazzurri from Chelsea on an initial six months loan deal. The former Nigerian international was previously on loan at Fenerbahce but ended his time at the club early to link up with his former boss, Antonio Conte, in Italy.

The former Wigan star deal was supposed to keep him at Inter for six months, but due to the coronavirus outbreak, the season has been extended till July.

As a result, Inter Milan are holding talks with Moses parent club, Chelsea, over an extension of his deal till Inter finish their campaign.

Speaking in an interview on Skysports with quotes gotten from Daily Mail, Inter Milan’s Sporting Director, Guiseppe Marotta revealed the club are walking on extending the loan deals for Alexis Sanchez and Victor Moses.

‘This is a great regulatory anomaly that needs to be resolved because we are still dealing with Chelsea and Manchester United today to try to extend their loans.’

The 29-year-old played an important role in Inter’s win over Parma last night, providing the assist for Bastoni’s winner.

CHECK IT OUT:  “They Shot First,” Army Explains Why Soldiers Killed 3 Police Officers In Taraba