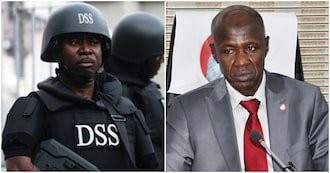 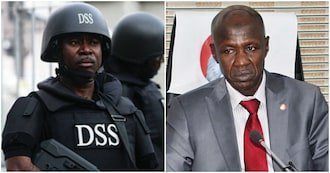 The Department of State Services (DSS) has denied reports that it arrested Ibrahim Magu, the acting chairman of the Economic and Financial Crimes Commission (EFCC).

Peter Afunanya, the spokesperson for the DSS made the clarification on Monday, July 6, after reports emerged that Magu was arrested by its operatives, PR Nigeria reported.

The EFCC also disclosed that Magu was only invited by a panel to Aso Rock questioning.

The Nation newspaper had reported that the panel which summoned Magu was probing the activities of the agency.

He was reportedly served the invitation to the panel, while on his way to the police headquarters, Abuja for a meeting.

The EFCC boss is said to be undergoing questioning at the villa by the probe panel over allegations that he diverted looted funds.

The AGF had asked President Muhammadu Buhari to sack Magu over some allegations, including the diversion of recovered loot.

According to The Cable, EFCC boss was said to have travelled to Dubai in the United Arab Emirates, without the authorisation of the president during the lockdown.

CHECK IT OUT:  Naira Marley Responds To Ibrahimovic Who Said “There Can Only Be One Zlatan”