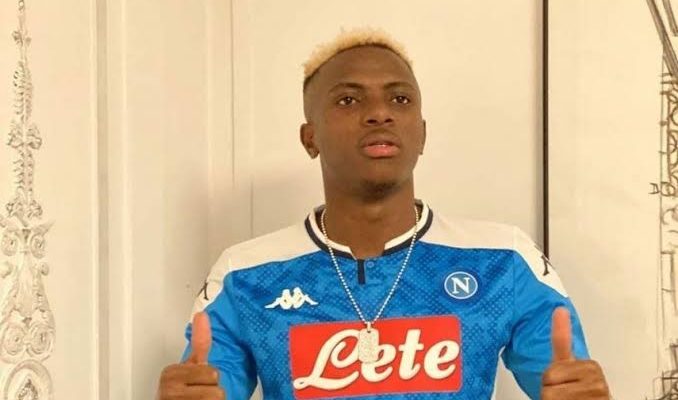 The Nigerian forward’s transfer to the Serie A side has finally been confirmed after weeks of uncertainty, a move that pleases no one more than his former boss

Former Golden Eaglets coach Emmanuel Amuneke has expressed his delight at Victor Osimhen’s switch from Lille to Napoli in a deal that makes the former Sporting Charleroi star the most expensive Nigerian footballer in history.

Amuneke brought Osimhen and several other talented youngsters, including Villarreal’s Samuel Chukwueze, to international limelight when he guided the Nigerian national under-17 side to triumph at the 2015 FIFA U-17 World Cup in Chile.

Osimhen has grown from claiming the Golden Boot and Silver Ball award at that tournament to sealing his reputation as one of the most exciting strikers in Europe at the moment.

The 21-year-old has smashed in 38 goals over the last two seasons for both Charleroi and Lille, a prolific streak that has convinced Napoli to put together an €80 million deal for him.

Also Read: Victor Osimhen – From Nothing To Napoli

Speaking to the Nation Sports, ex-Barcelona winger Amuneke is pleased that Osimhen has earned such a big-money move despite the crunch economic conditions brought about by the rampaging coronavirus pandemic.

“I’m excited and very happy that Victor has finally signed for Napoli, and this is remarkable particularly at these challenging times,” he said.

“Of course, I’m happy with the progress being made by the boys we picked in 2015 for the Golden Eaglets; you talk about Samuel Chukwueze in Villarreal; Kelechi Nwakali recently gained promotion to La Liga with Huelva, and there are others in other clubs in Europe too.

“This is an exciting time for Nigerian football, and I’m so pleased that Victor’s transfer to Napoli is now sealed; I wish him well.

“He’s a kind of player with hunger to win, and he will be a great asset to Napoli.”

Osimhen is contracted to Napoli for the next five years and is expected to earn between €4m and €4.5m per season.