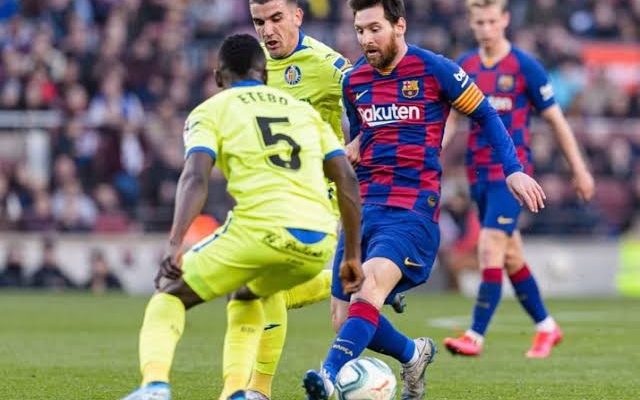 The Nigerian midfielder delivered a few energetic, eye-catching performances for the Spanish side but a string of unfortunate incidences may have forced him out of the Coliseum Alfonso Pérez

Getafe President Ángel Torres Sanchez has confirmed that Super Eagles star Peter Oghenekaro Etebo has played his last match for the Azulones as the club will not be looking to exercise their purchase option on the hardworking midfielder.

Etebo joined Getafe from Championship side Stoke City during the winter market in January on a temporary deal, and he went on to show his quality, playing 11 games – ten in La Liga and another in the Copa del Rey – and scoring a goal.

But injury halted the 24-year-old’s campaign. The former Feirense star last played in the 2-1 victory over Real Sociedad in late June, which coincidentally was the only win Jose Bordalas’ men recorded in their last seven matches before finishing eighth in the final league standing.

Etebo then had to depart Spain for Nigeria following the death of his father, and due to the travelling protocol in the African nation due to the coronavirus pandemic, the former Las Palmas ace has not been able to return to Madrid.

This means Etebo will not be available for selection when Getafe trade tackles with Inter Milan at the Veltins-Arena in Gelsenkirchen next week, forcing Torres Sanchez to decide on his future.

“Etebo was a father and his father also died. He managed to enter the country (Nigeria), but cannot leave,” the Getafe owner told EFE, as per TVI24.

“It will not come for the match against Inter and then it will go to England because we are not going to exercise the purchase option that we had.”

Etebo is under contract with Stoke City, which runs until the summer of 2023.