“He Can Become The Best” – Rohr Speaks On Osimhen’s Napoli Switch - NaijaCover.Com
Skip to content 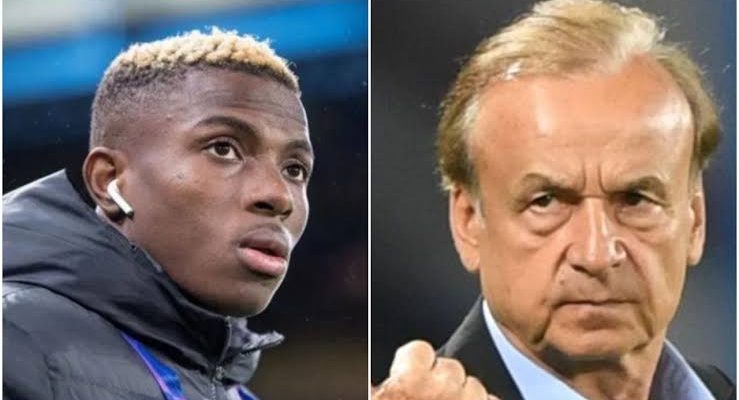 The Italian Serie A is widely known to be one of the most tactical and challenging leagues in the world, but the conditions are already set for the young striker to go over and shine there, says the German tactician

Super Eagles’ Technical Adviser Gernot Rohr is convinced that Osimhen has made the right move for his career, insisting that there are no fears that the youngster will struggle in Italy’s top flight.

Despite having initial doubts about moving to Italy amidst internal wrangling with his former agent, Osimhen reportedly snubbed late bids from Liverpool and Chelsea to sign a multi-million dollar contract with Napoli.

The five-year deal with one of Italy’s most passionately supported clubs made the former Lille ace the most expensive African footballer of all time.

Such a hefty transfer fee usually piles unwanted pressure on a player, but Rohr believes that as long as the 21-year-old enjoys regular playing time, he can develop further to be one of the world’s best frontmen.

“I’m not surprised about the movement of Victor Osimhen from Lille to Napoli because there was a good contact between them (Osimhen and Gattuso),” Rohr told Nation Sport.

“I told him that he has to personally meet the coach, Gattuso, because it’s very important that he start to play from the beginning (of his career with Napoli).

“This is a good transfer for Victor with a very big traditional Italian team, and he will have a good opportunity and exposure playing in the Champions League; I hope he will be happy there, and he can progress to become the best.”

CHECK IT OUT:  [Gospel Video] Esther Igbekele – His Praise (Ipokipo)

Osimhen will be competing for Napoli in the Europa League next season after Gennaro Gattuso’s men finished in the seventh position on the final Serie A standings this campaign.