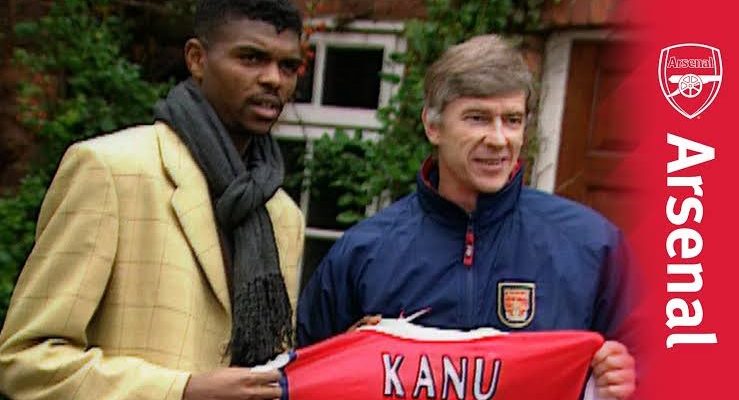 The French manager remains one of the most successful managers English football has ever been blessed with, and the retired Nigerian striker played a big part in that success story

Former France international Robert Pires has praised Arsene Wenger’s eye for players with an immense ability on the ball, saying that was the reason the former Arsenal boss enjoyed working with Nwankwo Kanu, among others.

More than six million euros exchanged hands between Arsenal and Inter Milan as Wenger took a gamble on Kanu during the January transfer window in 1999.

The 1996 Atlanta Olympics gold medalist had only just recovered from near-fatal heart surgery. Still, Wenger saw a quality in the Nigerian star and didn’t hesitate to bring him to the Premier League.

In England, Kanu flourished alongside Dennis Bergkamp, Thierry Henry, Silvain Wiltord, and Pires as Arsenal became the most attractive side to watch in the country.

Kanu scored 43 goals and had 25 assists in 195 games for the Gunners and was a member of Wenger’s ‘Invincibles’ that went the entire league campaign without losing a game.

Although the legendary Nigerian striker started a lot of those matches from the bench, Pires insists the former Super Eagles ace was the archetypal Wenger signing.

Speaking on the BBC MOTD Top 10 podcast, Pires said it was “an honour and a privilege” to work under Arsene Wenger, adding: “Arsene helped me off the field too. He was like a second dad to me.

“He loved a player with very good quality and ability with the ball. That’s why he enjoyed Thierry Henry, Nwankwo Kanu, and Bergkamp.”

Kanu won two Premier League titles and two FA Cups for the Gunners before he left Arsenal for West Brom in 2004.