Chelsea, Napoli To Score Plus Other Betting Tips As The UCL Returns - NaijaCover.Com
Skip to content 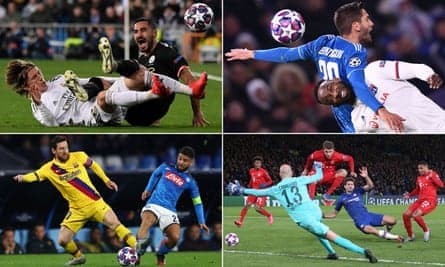 Last weekend final round of games in the Italian Serie A brought an end to the domestic football season across Europe’s top five leagues.

However, while some players are already in Dubai, Spain and the Caribbean enjoying their vacation, others don’t have that luxury as they still have work to do.

The UEFA Champions League make its long-awaited return this weekend with the second legs of the round of 16 ties kicking off proceedings.

The competition like other football competitions was suspended in March due to the coronavirus. But after almost five months, Europes biggest club competition finally returns-although in a different format.

After the remaining second round ties are decided this weekend, the quarterfinals and semi-finals will be a one-leg encounter in Portugal as opposed to the home and away clash which is the standard format.  The final will also take place in Portugal’s capital, Lisbon on the 23rd of August.

Four second-round ties have already been decided with winners in the other games to be known this weekend.

And in our usual tradition, Soccernet.ng is providing betting tips for these games.

Juventus vs Lyon: Juventus won their ninth successive Serie A title, but their form post lockdown has been far from convincing.

The Old Lady suffered losses to AC Milan, AS Roma, Cagliari and Udinese on return to Serie A action, and that drew a lot of questions about their ability to challenge for the Champions League. They host Lyon in the second leg of their round of 16 encounter having lost the first leg by a single goal.

Maurizio Sarri’s side can’t afford to play the way they did after the break if they are to turn around the tie. For Lyon, they go into the game, knowing an exit means no Champions League football next season.

CHECK IT OUT:  [Lyrics] Falz – Loving

Rudi Garcia’s side finished outside the top three places after the Ligue 1 season was cancelled due to COVID-19.

There have been under 2.5 goals scored in Juventus‘s last three games (Champions League).

Juventus have seen under 2.5 goals in their last three matches against Lyon in all competitions.

Juventus deficiencies were exposed in some Serie A games after the break, but the Old Lady have Cristiano Ronaldo who has made the Champions League his competition.

Also, Lyon’s first competitive game in over four months was the Coupe de la Ligue final loss to PSG, which means the French side could be a little rusty going into this one. (Juventus to win and qualify)

Manchester City vs Real Madrid: City won the first leg at the Santiago Bernabeu 2-1, and will be confident of getting the job done at home- even without fans.

However, if there’s any team capable of turning the tie around, it’s Real Madrid. Los Blancos are the most successful side in the competition with 13 titles, including three of the last four.

Madrid were crowned La Liga champions, and that should give them confidence going into the encounter. They’ll, however, be without their influential captain, Sergio Ramos, as he was sent off in the first leg.

There have been over 2.5 goals scored in 37 of Real Madrid’s last 41 games (Champions League).

Man City have scored at least two goals in 13 of their last 16 matches (Champions League).

CHECK IT OUT:  Gov Ganduje sacks Commissioner for rejoicing over Abba Kyari’s death

Madrid have no other option than to attack, and that should make it an open game. Having lost the Premier League title to Liverpool, winning the Champions League is what will represent a successful season for City.

The Champions League is known for springing up surprises, but City should get the job done in this one. (City win or Over 2.5)

Barcelona vs Napoli: Barcelona also need the Champions League to have what can be considered a successful season.

The Blaugrana lost the defence of their La Liga title while they also suffered a quarterfinal exit at the hands of Athletic Bilbao in the Copa Del Rey.

The Champions League is their only chance to win a trophy this season, and they need to beat an in-form Napoli side to stay on course.

Napoli were one of the impressive teams following football’s resumption in Italy, beating Juventus on penalties in the Coppa Italia final.  They also had impressive wins against the country’s capital sides, Roma and Lazio.

Their clash against Barcelona is finely poised with both sides playing out a 1-1 draw in the first leg back in February.

Barcelona are undefeated in their last seven matches (Champions League).

Napoli are undefeated in their last seven matches (Champions League).

Barcelona are the slight favourites, but it won’t be a surprise if Napoli win the encounter given the Spanish side’s form since resumption.

They will also be missing the services of Sergio Busquets and Arturo Vidal, while they’ve been a suspect defensively.

CHECK IT OUT:  “President Buhari’s Government Is Full Of Insane And Crazy People” – Fani Kayode Roars (DO YOU AGREE?)

This is a hard one to predict, but it should be a game of chances, and that means goals. (BTS or Over 2.5)

Bayern Munich vs Chelsea: A miracle aside, it’s hard to see Chelsea progressing to the quarterfinals. The Blues go into Allianz Arena with a three-goal deficit after suffering a 3-0 loss in the first leg.

Chelsea manager, Frank Lampard could also be without about seven first-team players including the red-hot Christian Pulisic.

The American has been Chelsea’s best player since resumption but went off with a hamstring injury in the FA Cup final loss to Arsenal.

Meanwhile, for Bayern Munich, they’ll be confident seeing the job through even though their last competitive game German Cup victory over Bayer Leverkusen at the beginning of July.

Bayern have scored at least three goals in six of their last seven matches (Champions League).

There have been over 2.5 goals scored in seven of Bayern’s last eight games (Champions League).

There have been over 2.5 goals scored in Chelsea’s last four games (Champions League).

Bayern are undefeated in their last five matches against Chelsea in all competitions.

Chelsea’s injury woes make it impossible to see anything other than a Bayern win. But the Blues should do enough to score. (Bayern Win and BTS)