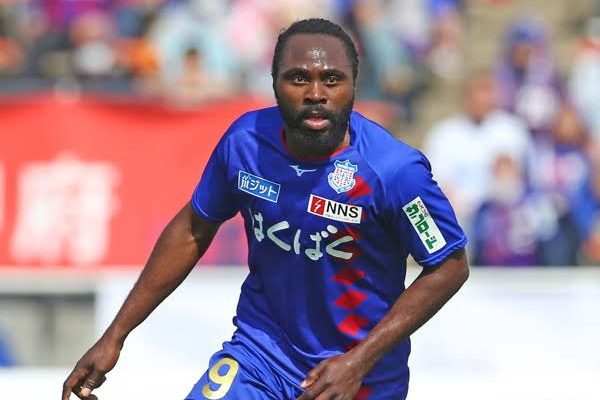 The 36-year-old Nigerian striker was by some distance the most outstanding star on the pitch on Saturday, scoring all his side’s goals in Kyoto Sanga’s thrilling 4-3 win at Montevideo Yamagata.

Peter Utaka netted an incredible four goals to power Sanga to their first away win of the season on Match Day 10 of the 2020 season.

Hiroko Noda opened the scoring for the home side at the ND Soft Stadium, but two quick-fire goals past the half-hour mark pushed the visitors’ noses in front in the highly entertaining encounter.

A brace from Yuya Yamagishi either side of the interval had the scoreboard reading 3-2 in favour of Yamagata, who had failed to win any of their last seven matches in the J League 2.

But Utaka was not done, and he grabbed his hattrick in the 53rd minute to drag his team back on leveled terms.

The former Super Eagles striker then completed the comeback for Sanga three minutes from time with his ninth goal in ten games.

Utaka smashed in a personal best 21 goals for Ventforet Kofu last year aged 35, and he appears fired up to do even better this term for Sanga.

This latest win, Sanga’s fifth of the campaign, lifts Noritada Saneyoshi’s side to fourth on the league table, five points behind leaders V-Varen Nagasaki in the race for promotion.

Sanga next host 10th placed Mito Hollyhock at the Sanga Stadium on Wednesday.