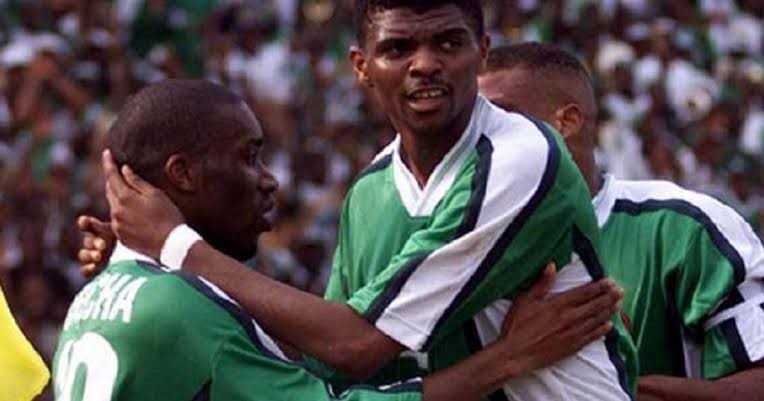 The former Bolton Wanderers star and the retired Arsenal striker were two of Africa’s biggest stars to play the game, and a former teammate has confessed they were instrumental to his international success

Recently appointed Montpellier U-19 coach John Utaka has hailed the duo of Nwankwo Kanu and Austin Okocha for the inspiration and mentorship they both provided him back when he was an unknown youngster.

Kanu is one of Nigeria’s most decorated footballers in history, winning the league and domestic cup titles in the Netherlands and England as well as lifting the Champions League with Ajax in the mid-90s.

But the former Inter Milan star’s biggest triumph, however, came in the green-and-white colours when he teamed up with the mercurial Okocha to power Nigeria’s Dream Team to win gold at the 1996 Atlanta Olympic Games.

Utaka was only in his teens then, but four years later, the former Portsmouth winger rose to prominence in Egypt after claiming the Egyptian League top scorer award at the turn of the millennium.

He was after that invited to the Super Eagles to share the same dressing room with his childhood heroes.

“Kanu competed in the Olympic games. He inspired me a lot because he was not a fast player, but he is very smart and very technical in games,” Utaka told the Montpellier website.

“When I got my first call-up to Nigeria in 2000, he was there with Okocha, and for me it was… I was watching them on TV, and there I was playing with them. It was a dream fulfilled.

CHECK IT OUT:  Police Arrest Tanzanian Pastor, Boniface Mwamposa After Death Of 20 People In His Church

“They encouraged me by telling me not to be afraid to express myself as I knew how to do and especially to listen to the coaches. It was good advice.”

Utaka went on to earn 49 caps for the Super Eagles before calling time on his international career in 2012.

A few weeks ago, French side Montpellier, with whom he won Ligue 1 in 2012, hired him to handle the club’s youth team.