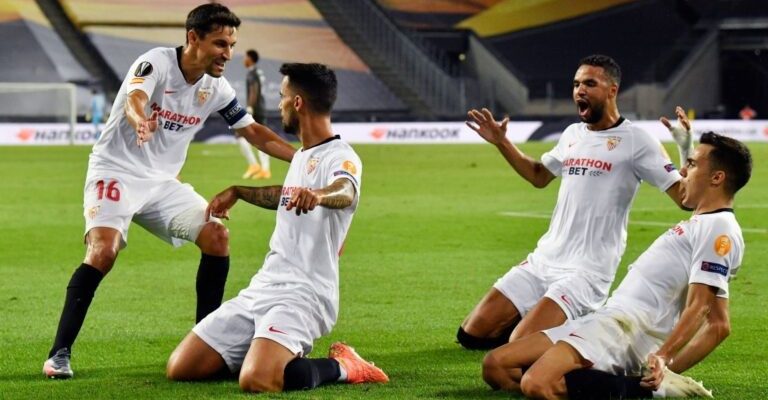 Sevilla, the most decorated club in Europa League/UEFA Cup history with a record five titles, advanced to the final of the 2020 Europa League following the 2-1 defeat of Manchester United on Sunday evening.

Carlos lunged in on Rashford after the English striker received a delightful reverse pass from Martial in the box, allowing Fernandes to open the scoring from the spot.

However, Sevilla responded well, showed their quality on the ball, and crafted an equaliser, with Suso converting from Reguilon’s cross at the back post. One-all it was at the break with all to play for after the break.

United started the second half the better of the two sides creating chances for fun but Sevilla’s goalkeeper Bounou kept the Spanish side in the game with saves from Greenwood, Pogba, and Martial at different times.

United escaped a penalty call thanks to VAR when the ball struck Fernandez on the elbow in the area.

There was to be no escaping the inevitable though, as Sevilla took the lead for the first time on the night moments later.

United switched off momentarily at the back allowing Jesus Navas to cross from the right, with Lindelof and Wan-Bissaka both failing to mark De Jong, and the substitute prodded in from close-range as the delivery finds him in the six-yard box.

CHECK IT OUT:  Jose Mourinho Makes Decision To Return To Real Madrid