NDDC’s Pondei Says He Was Not Acting When He Fainted At Reps Hearing - NaijaCover.Com
Skip to content 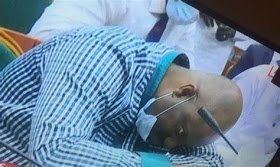 Pondei unexpectedly fainted while being questioned by members of the House of Reps exactly one month ago.

The NDDC MD told Vanguard that he had a mysterious and unpredictable health challenge that led to the scenario.

“I had an unexplained, unexpected health challenge. It is ridiculous to think that people believed I was acting, the MD said.

I would not pray for anyone to experience what I went through. I do not run from issues. I have put all that behind me.
Pondei slumped while taking questions from the members of the House of Reps committee.
He allegedly fainted while one of the committee members was speaking, leading to disruption of the hearing as efforts were made to revive him.

Pondei’s collapse had led to a 30-minute adjournment of the session.

He had appeared alongside the Minister for Niger Delta Affairs, Godswill Akpabio to answer questions on issues bothering on financial misconduct in the commission.
from dailypost.

The post NDDC’s Pondei Says He Was Not Acting When He Fainted At Reps Hearing appeared first on .

CHECK IT OUT:  Breaking!!! PSG’s Mbappe Gets 3 Match Ban For Doing This