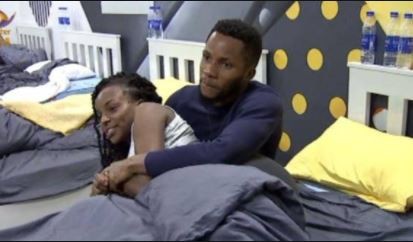 Big Brother Naija housemates, Wathoni and BrightO are gradually becoming romantically entangled as they have been spending time together, recently.

In a video captured by Kemi Filani News, Brighto was pictured caressing Wathoni aggressively under the Duvets, on Friday night. Watch video below;

This came after Brighto on Wednesday night professed his feelings for Wathoni while they were on the same bed. He told Wathoni that he liked her and wants her to remain in the house.

Some of the reactions below;

@Cynthiaosham “ Na wa Wathoni and Brighto under duvet, Ozo and Nengi same thing, Kidd and Erica, Vee and Neo, abeg wetin happen seems like this is ultimatelove2. Is there something else they promised lovers on the show.”

@Olajuwon “ One man down. We have lost one of the Ministers of God to the world.”

CHECK IT OUT:  Regina Daniels ‘forcefully’ agrees that her body count is over 5