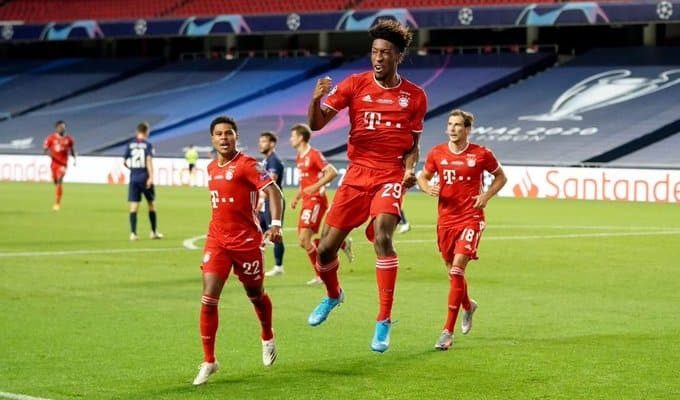 Kingsley Coman’s second-half header powered the Bundesliga champions to a 1-0 victory over Paris Saint-Germain at the Estadio day Luz and their sixth UEFA Champions League title.

With the victory, Hansi Flick’s side has added Europe’s premier club honours to the league and cup titles claimed earlier, replicating the incredible feat of the squad of 2012/13.

A lively opening 45 minutes at the Estadio da Luz saw Bayern retain the majority of the possession. Still, it was the French champions who arguably should have been in front at the midway point.

Neymar, Di Maria, and Mbappe had big opportunities to score but were both denied by Neuer.

Still, Thomas Tuchel’s men became the first side to stop Bayern from scoring in the first half of a match since the restart.

Lewandowski hit the post pretty much out of nowhere for a Bayern side that struggled to create much in the first half, with the best chances falling to PSG.

Bayern were quicker and sharper after the break, and their efforts were rewarded on the hour mark.

Kimmich picked up a loose ball 20 yards from goal, clipped it to the edge of the six-yard box, and Coman got in front of Kehrer to brilliantly direct an angled header away from Navas into the bottom-right corner.

PSG responded well to going behind, but the Ligue 1 giants simply couldn’t conjure an equalizer the last 30 minutes of the tie.

There was no stopping Bayern Munich, though, as the Germans cruise to their eleventh UCL win of the campaign and their sixth Champions League title in history.