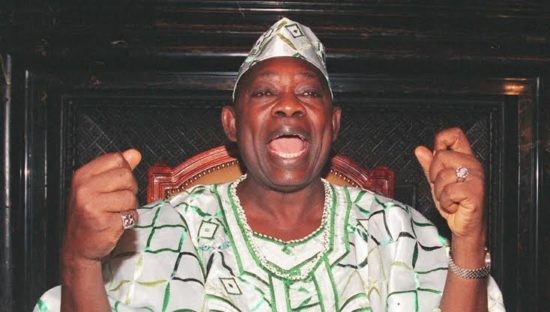 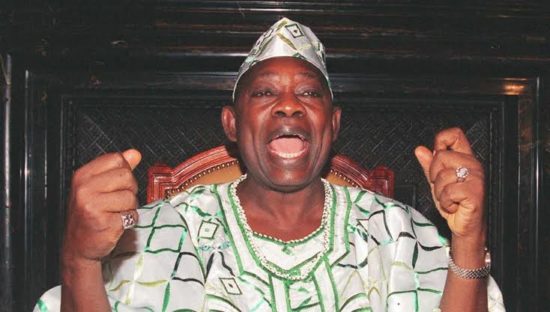 MKO Abiola ran for the presidency in 1993, for which the election results were annulled by the preceding military president Ibrahim Babangida because of allegations that they were corrupt and unfair. Abiola was awarded the GCFR posthumously on 6 June 2018 by President Muhammadu Buhari and Nigeria’s democracy day was changed to June 12.

Abiola was a personal friend of Babangida and he is believed to have supported Babangida’s coming to power.

Abiola’s support in the June 1993 presidential election cut across geo-political zones and religious divisions, among a few politicians to accomplish such a spread during his time. By the time of his death, he had become an unexpected symbol of democracy.

Imprisonment
In 1994 Moshood Abiola declared himself the lawful president of Nigeria in the Epetedo area of Lagos island, an area mainly populated by (Yoruba) Lagos Indigenes. He had recently returned from a trip to win the support of the international community for his mandate. After declaring himself president he was declared wanted and was accused of treason and arrested on the orders of military President General Sani Abacha, who sent 200 police vehicles to bring him into custody. MKO Abiola has been referred to as Nigeria’s greatest statesman. His second wife Alhaja Kudirat Abiola was assassinated in Lagos in 1996 after declaring public support for her husband.

Moshood Abiola was detained for four years, largely in solitary confinement with a Bible, Qur’an, and fourteen guards as companions. During that time, Pope John Paul II, Archbishop Desmond Tutu and human rights activists from all over the world lobbied the Nigerian government for his release. The sole condition attached to the release of Chief Abiola was that he renounce his mandate, something that he refused to do, although the military government offered to compensate him and refund his extensive election expenses. For this reason Chief Abiola became extremely troubled when Kofi Annan and Emeka Anyaoku reported to the world that he had agreed to renounce his mandate after they met with him to tell him that the world would not recognise a five-year-old election.

Death
Abiola died in suspicious circumstances shortly after the death of General Abacha, on the day that he was due to be released, 7 July 1998. While the official autopsy stated that Abiola died of natural causes, Abacha’s Chief Security Officer, al-Mustapha has alleged that Moshood Abiola was in fact beaten to death. Al-Mustapha, who was detained by the Nigerian government, but later released, claims to have video and audiotapes showing how Abiola was beaten to death. The final autopsy report, which was produced by a group of international coroners has never been publicly released. Regardless of the exact circumstances of his death, it is clear that Chief Abiola received insufficient medical attention for his existing health conditions.

CHECK IT OUT:  BREAKING!!! Ighalo Retires From International Football

As recounted at the time in a BBC interview with special envoy Thomas R. Pickering, an American delegation which included Susan Rice visited Abiola; during their meeting with him, Abiola fell ill,[49] with what was presumed to be a heart attack which caused his death.