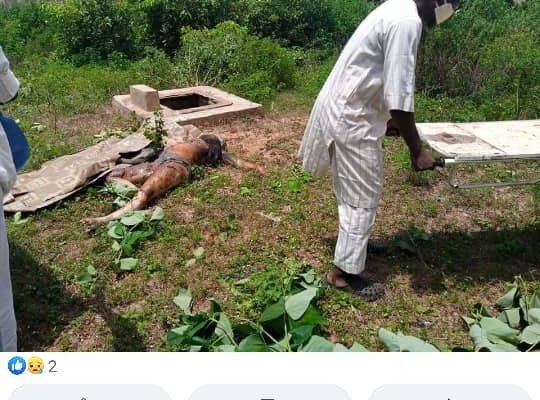 Loading...
Lifeless Unidentified Body has been found in a Lodge behind New Creation Academy in Bida, Niger State.

At the scene of the Incident the Chief security Officer of the Federal Polytechnic Bida in person of Idris Sulieman said some Herdsmen who were in search of their missing cow called and reported that they’ve found a Dead body in a well.
He made necessary phone calls among which were the Police and Local Government chairman and informed them of the unfortunate incident.

A Team of medical Personnel from the Federal Medical Center Bida later moved the body from the Scene of the incident to FMC to ascertain the cause of death. Details of this, as the Police are still investigating.

What could have been the cause of her death?

Are the fulani headsmen responsible?

What could she still be doing in school, in this trying times? CHECK IT OUT:  Police React To Video Of Dead Vultures In Enugu Community