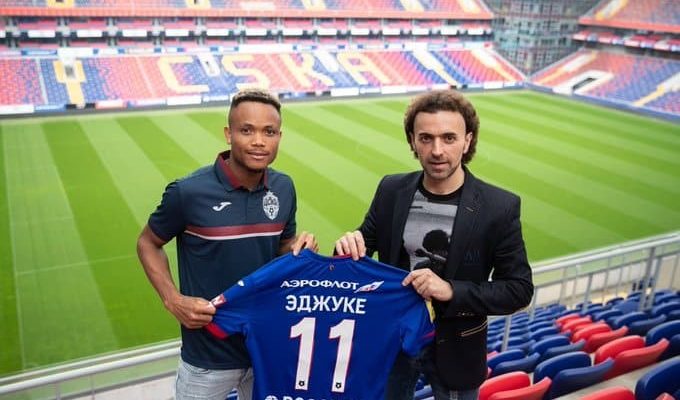 It’s been quite a journey for the young Nigerian who will be plying his trade in the Russian Premier League this season.

Chidera Ejuke is just 22-yeard-old, but he is already becoming a journeyman having played in Norway, Netherlands before his move to Russia.

Ejuke started his career with Supreme Court in 2016 before moving to Gombe United the same year. He stayed with the Desert scorpions for another year before he was signed by Norwegian side, Valerenga.

It was at Valenrenga he began to hone his skills. The dynamic winger made 59 topflight appearances for Hallvard’s Men, scoring 13 goals and registering three assists.

After two years in Norway, Dutch side, Heerenveen were impressed with his performances and decided to pay two million euros for his services last summer.

His move to to the Eredivisie brought him to the spotlight with many Nigerians taking notice of his displays for De Superfriezen.

In what would be his only season in the Dutch League, Ejuke was Heerenveen’s best player. The Nigerian was a thorn in the flesh of defenders as they struggled to cope with his dribbling skills and mazy runs down the flanks.

Ejuke attempted and completed more dribbles than any other player that played ten or more matches in the Eredivisie last season. Although the 22-year-old have been criticised for his end product, he still provided decent numbers last season.

Ejuke scored ten times and had a hand in another six in 29 games for Heerenveen. With his brilliant displays, it was expected that clubs would be interested in his services.

Galatasaray and Ajax were clubs linked with a move for him, but surprisingly, it was Russian Premier League side, CSKA Moscow that won the race for his signature.

So Is It A Wise Career Move?

Before the disruption in football calendar as a result of the COVID-19 pandemic, Ejuke was tipped for a Super Eagles call-up.

His impressive showings did not go unnoticed among Nigerians, who urged Gernot Rohr to extend an invitation to the youngster.

When asked who are the Nigerian players that impressed him last season, former Golden Eaglets manager, Emmanuel Amuneke, claimed he was impressed with Ejuke’s performances.

“When I first saw Chidera Ejuke, it was in Kaduna when I was going around Nigeria to scout for players to make up the U-17 for 2015 edition,” Amuneke said.

“Chidera is a very good player, technically. As a young boy, you could see the technicality in him as a player, but of course, there are other aspects that must be improved.

While his quality is not in doubt, his move to a Russia may have reduced his chances of regularly featuring for the Super Eagles.

Although the Russian Premier League ranks seventh in UEFA’s country coefficient rankings, it is not really the best place for a young player still in the developmental stages of his career. To some, it’s like the Chinese League of Europe, which makes Ejuke’s move baffling.

Besides CSKA Moscow finished outside the top two places in the Russian topflight last season, and they won’t be playing in the UEFA Champions League next season.

The deal raises more questions than answers and draws comparison with Cyriel Dessers, who joined Genk from Heracles.

Strangely, two of Nigeria’s hottest prospects in the Dutch topflight last season chose to make a move that could not be considered as an upgrade- although it would also be puffery to say it is a downgrade.

But he could do a lot better than a move to Russia, or preferably continue his development with Heerenveen. As for his Super Eagles hope, he would need to improve on his last season’s performance to get a chance.

Nigeria’s attacking department is well stocked with quality players playing in Europe’s top five leagues, which means for a player like Ejuke playing in Russia, he would need to perform better than his rivals.

It would be harsh to say he should not get his chance because he’s playing in a less fancied league, but the move could do more harm than good for his career.

We will find out soon.!