Saka’s Omission And Eze’s Withdrawal From England Squad Could Be A Good Sign For Nigeria - NaijaCover.Com
Skip to content 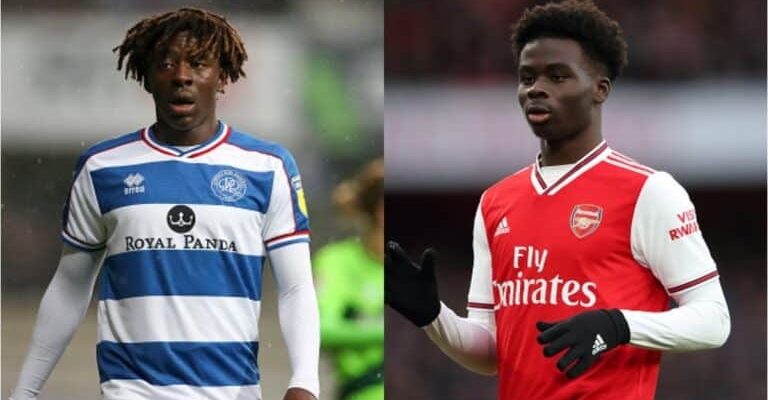 It’s an open secret that Nigeria are hoping to persuade the two youngsters to represent the country at international level.

Saka and Eze are two highly talented players born in England to Nigerian parents. The former was born in Ealing, Greater London, while the latter grew up in Greenwich.

Although born in England, both players qualify to play for the Super Eagles through their parents, and it’s no surprise that Nigeria are making efforts to convince the two guys to choose the three-time African champions ahead of England.

A look at their rise first.

Saka started his career in Arsenal’s famous academy and has gone on to become an established member in the first team.

The 18-year-old was handed his Arsenal debut by former Gunners manager Unai Emery in a Europa League match against Vorskla Poltava in November 2018, coming on for Aaron Ramsey.

Three months later he made his Premier League debut in a Premier League game against Fulham. While he did not feature a lot after then, he made remarkable progress at the just-concluded season.

Even though he was just 18 and was playing in his first full season as a first-team player, Saka was one of Arsenal’s star performers.

Meanwhile, Eze also started his career with Arsenal’s youth team, but he left to sign for Fulham’s youth team in 2011. After leaving Fulham, he had stints with Reading and Millwall’s Youth sides.

CHECK IT OUT:  Ekong’s Move To Watford Raises Questions About The True Quality Of Nigerian Stars

However, in 2016 he was released by Millwall, and that left him clubless. Nonetheless, the dynamic midfielder did not give up and had a trial at Queen’s Parks Rangers (QPR), which was the club where Eze’s talent was utilised.

He inked a deal with the Hoops following a successful trial but had to go out on loan to Wycombe in 2017. On his return to QPR, Eze’s game went up a level.

Last season, Eze was one of the best players in the Championship despite playing for a QPR side that finished outside the top ten places.

The 22-year-old scored 14 times and added another eight assists in 46 Championship games for Mark Warburton’s men last season. It made Crystal Palace pay 20 million pounds including add-ons for his services.

Now To Their International Future Debate.

It’s clear to see why the Nigeria Football Federation (NFF) is trying to convince the two players to ditch England judging from their performances last season.

Both Saka and Eze have not decided on this issue, but they’ve been capped at the U21 level by England, which gives the Three Lions an advantage.

However, there was a twist last week which suggest the two players may still represent Nigeria after all. International football returned last week with the UEFA Nations League.

England manager Gareth Southgate named his squad but left out both Saka and Eze from his team- even though they were in Aidy Boothroyd’s U21 squad.

Knowing Nigeria are interested in their services, it was a surprised neither players received a call-up for England’s two Nations League games.

This is not the first time the NFF has tried to convince players of Nigerian descent born in England to represent the Super Eagle.

CHECK IT OUT:  FRSC Urges Drivers To Obey Traffic Rules To Reduce Accidents

England realised they couldn’t lose them another talented player to Nigeria and gave them a call-up at the very first opportunity- although one must admit that Abraham had declared his intentions to play for the Three Lions.

Nonetheless, the Gareth Southgate could also have taken the same approach with Saka and Eze as playing in the Nations League means Eze could no longer switch international allegiance.

In Saka’s case, his absence is more baffling because there was no recognisable left-back in Southgate’s squad, and having played in that position for Arsenal brilliantly, he could’ve been handed a call-up by Southgate. Could both players omission be as a result of them still harbouring thoughts of switching international allegiance?

While the two youngsters were in the U21 squad for Euro U21 qualifiers, Eze had to withdraw with no reason given for his explanation.

Though there were reports he pulled out to settle in quickly at his new club, it could also be a case of him feeling he’s grown past the U21 level or ready to represent the Super Eagles.

Of the two players, Eze looks more likely to switch allegiance as he has once trained with Nigerian squad while he also had a meeting with NFF’s president Amaju Pinnick.

When asked about where his allegiances lie, Eze revealed he has not made a decision, but he is honoured to play for both countries.

“Yes, of course, when the time comes, I will decide when it is right to do so, I don’t want to make a rash decision”, Eze said.

Saka was also diplomatic in his answer when asked the same question, saying he is happy to play for both countries.

“I’m happy to have represented England at youth level, but I’m also proud of my Nigerian heritage from my parents.

“We haven’t been picked by any team, so it’s about staying humble, and when the time comes, we’ll make the decision.”

While neither player is yet to make a decision, what has happened in the last few days is a boost for Nigeria’s hopes.