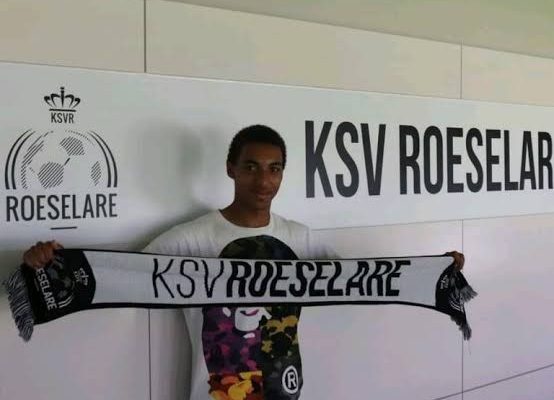 Born in England to a Nigerian father and an Italian mother, Olukayode Jacomo Osu is eligible to play for any of those traditional football nations, but he is more passionate about starring for the African giants

KSV Roeselare midfielder Olukayode Osu admits he has never been to Nigeria. Still, the 18-year old has pledged his allegiance to Nigeria’s green and white, insisting that he would be proud to represent the West African nation.

Able to play as a centre midfielder and a defensive midfielder, the versatile Osu quit the Wimbledon academy in July to sign his first professional contract with Belgian second-tier side, Roeselare, a couple of weeks ago.

But the ambitious youngster is focused on enjoying a fantastic debut season as a professional in Belgium so he can fulfil his life-long dream of playing for Nigeria.

“Few years back in 2013, when the Super Eagles played against Italy in a friendly in England where I was raised, I was there with my family, and it was a great game even though it was against my mother’s country and it felt really close to home.”

“At the moment, I would say Wilfred Ndidi of Leicester City who I saw every time because when I was in England, Leicester were always on the television and they are one of the big teams in the Premier League.

CHECK IT OUT:  Just In: Youths Stopped From Attacking Oshiomhole In Benin

“Then, in the past, I used to like watching Yakubu Aiyegbeni when he played for Everton and Blackburn and also when he played in the World Cup for Nigeria.”

Osu plans to visit his Lagos-born father’s family in the next few months and hopes to be a part of the Flying Eagles in the nearest future.