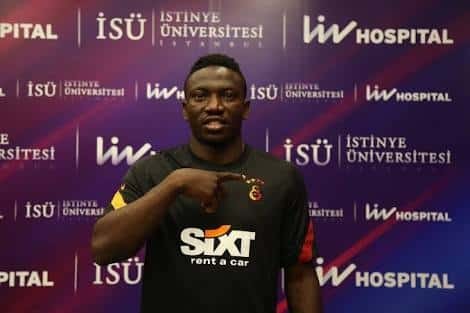 The Nigerian international, on Wednesday, sealed a move to join Galatasaray on loan until the end of the season

Super Eagles midfielder Oghenekaro Peter Etebo has expressed his delight at joining Turkish giants Galatasaray after signing a loan deal that will keep him with The Lions until the end of the 2020-21 season.

Galatasaray have agreed to pay Stoke City a loan fee of 675,000 euros, with an option to buy set at 7.5 million euros before the end of the midfielder’s loan spell.

Etebo is also set to pocket 1.2 million euros (N594 million) over the duration of his contract with Galatasaray.

“I am very happy to have come to such a big and historic club,” Etebo told Galatasaray TV after the deal was sealed.

“Thank you to our president and our vice presidents for their warm welcome.

“I really felt at home. See you at the championship at the end of the season. On this occasion, I would like to thank our President, all technical staff, and all our fans for a warm welcome.”

Etebo joined Stoke City in 2018 but spent the second half of the last campaign on a temporary deal at La Liga club Getafe.

Injuries and the death of his father amidst the suspension (due to the coronavirus pandemic) and resumption of the Primera Division robbed him of the chance to make the most of his time in Spain.

This is the first time the 24-year-old will be plying his trade in Turkey since leaving Nigeria in 2016, having previously played in Portugal, Spain, and England.