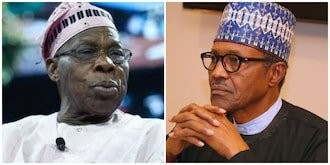 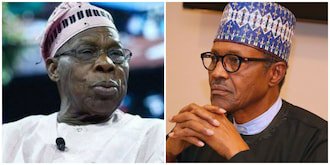 Former Nigerian leader, Olusegun Obasanjo, has unleashed a fresh volley of attacks on the incumbent, President Muhammadu Buhari, over his handling of the country’s affairs.

Daily Trust reports that Obasanjo warned that Nigeria is fast drifting towards a failed state under the administration of President Buhari.

Obasanjo was said to have made the claim during a speech titled ‘Moving Nigeria Away From Tipping Over’ which he delivered at a dialogue in Abuja, the federal capital.

The former president expressed sadness at the divided state of the nation and charged that necessary steps have to be taken to prevent the situation from deteriorating further.

“Old fault lines that were disappearing have opened up in greater fissures and with drums of hatred, disintegration and separation and accompanying choruses being heard loud and clear almost everywhere,” Obasanjo said.

Obasanjo described Nigeria’s current state as saddening and embarrassing to citizens. The economy, he said, is now a basket case.

“I do appreciate that you all feel sad and embarrassed as most of us feel as Nigerians with the situation we find ourselves in.

“Today, Nigeria is fast drifting to a failed and badly divided state, economically our country is becoming a basket case and poverty capital of the world, and socially, we are firming up as an unwholesome and insecure country.”

The post Obasanjo attacks President Buhari, says Nigeria is becoming a failed state under him appeared first on .

CHECK IT OUT:  I Want Nigerians To Stop Going Abroad For Treatment – Buhari