What Went Wrong For Oghenekaro Etebo? - NaijaCover.Com
Skip to content 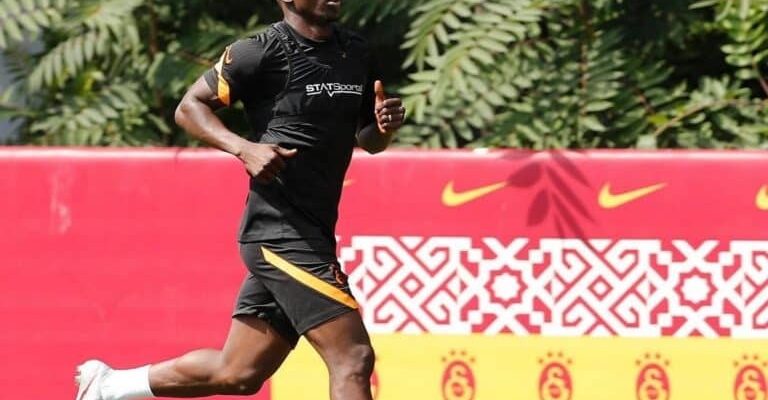 Oghenekarao Etebo’s move from Championship side, Stoke City to Galatasaray, shows how things can change quickly in football.

As at last year, the Super Eagles star was not just one of the undroppables in Nigeria’s squad, but he was also one of the country’s best stars in Europe. However, a year later, the 24-year-old finds himself in a situation where he’s trying to enjoy his football again.

The former Warri Wolves midfielder is obviously a talented player, but some decisions he has made in the last two years has been baffling.

Etebo joined Stoke City from Feirense just before the 2018 World Cup. It was a move that raised eyebrows as many believed he could’ve waited until after the World Cup before signing the deal.

Stoke had just been relegated from the Premier League, and it came as a surprise when Etebo announced he would be leaving the Portuguese top-flight for England’s second division.

Although Nigeria went out in the first round of the World Cup, Etebo was one of the positives, and there would’ve been clubs willing to acquire his services had he not sign for Stoke.

Nonetheless, Etebo linked up with his new teammates after the World Cup and settled in quickly. His class showed in an average Stoke side and was voted by fans as the club’s player of the season, which was also his debut campaign.

He was expected to build on that in his second season, but things soon turned sour for him. Due to his involvement with Nigeria at the 2019 Africa Cup of Nations, Etebo joined Stoke preseason training late, and that’s where his problem started.

CHECK IT OUT:  Let’s Talk Guys! What Would You Do To A Lady That Does This To All Your Properties? (See Photos)

The ex-Las Palmas midfielder missed the Potters opening two games of the Championship before making a three-minute appearance in the third game.

He started to feature more subsequently, but he suffered a setback when he picked up an injury against Sheffield Wednesday, which turned out to be his last game for Michael O’Neil side.

Etebo found himself frozen out of the team on return and only made the bench twice between October and January.

With his career heading on a downward spiral, Etebo was offered an escape route by Spanish side, Getafe. The Azulones signed the Nigerian on a six-month loan deal with an option to buy permanently.

He settled in quickly at Getafe and featured in Jose Bordalas team regularly. But just when his career is picking up again, La Liga along with other football leagues was suspended due to the coronavirus pandemic.

The break lasted for over three months, and it was even worse for Etebo as he could not travel with his family to Nigeria.  He spent the three months break alone in Spain– although Getafe tried to make sure he feels at home.

When the Spanish top-flight returned from the coronavirus outbreak, Etebo featured in the first three games before he picked up another injury in the match against Eibar. He returned in the clash against Real Sociedad, but that turned out to be his last game.

The Olympic bronze medalist missed Getafe’s final games of the season because of an injury. He also missed the Europa League encounter with Inter Milan as he had to bury his late father.

CHECK IT OUT:  MY GOD! 9 Young Girls Drown In Zaria Canoe Accident

As a result of these unfortunate circumstances, Getafe refused the option to sign the Nigerian permanently. On his return to Stoke, it was clear his longterm future is not the bet 365 stadium and was offered an opportunity by Galatasaray, who took him on loan.

While it was not a surprise to see him leave the Potters, the move to Turkey was not a popular choice. At the age of 24, Etebo should be playing in a better league than the less fancied Super Lig.

No disrespect to the Turkish top-flight, but it is not the best place for a player approaching his mid-twenties, which is supposed to be his peak period.

He will reportedly earn 1.2 million euros in Turkey, and that could have played a role in his decision to join Faith Terim’s side.  Though he is set to get more playing time with the Lions, the move could affect his chances in Nigeria’s squad.

Before his travails last year, Etebo was one of Gernot Rohr’s favourites in the Super Eagles squad. However, with the likes of Wilfred Ndidi, Joe Aribo, Alex Iwobi and potentially, Ebere Eze all playing in more popular leagues, Etebo could find himself relegated to the bench.

His compatriot, Henry Onyekuru, had a season to remember with Galatasaray in the 2018/2019 campaign, scoring 16 goals to help the Lions complete the League and Cup double.

But despite his exploits, it was not still enough to convince Rohr, who selected Moses Simon and Samuel Kalu as his two starting wingers at the 2019 AFCON.

CHECK IT OUT:  Do You Agree? “Evans Should Join APC And His Sins Will Be Forgiven” – Reno Omokri

Etebo could also find himself in such a similar situation following his move to Gala. With competition for places increasing, it’s only logical for Rohr to pick players playing in top leagues, and Etebo does not fall into that category.

Nonetheless, it’s good to see the former Warri Wolves back, and who says he can’t still retain the trust of Rohr if he plays out of his skin in Turkey.