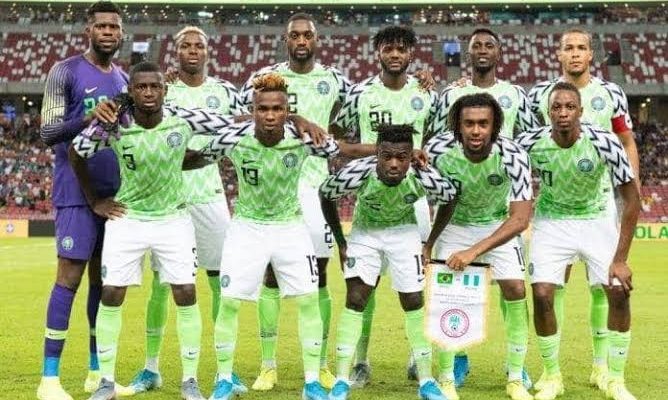 Gernot Rohr’s side has been evolving over the past few years, and the expectation is that the team would be ready to conquer the continent and make a massive impact at the World Cup in the next couple of years

President of the Nigeria Football Federation, Amaju Pinnick, has pointed out that the aim for which the body organised the two international friendly matches in October for the Super Eagles is to get the team back in top shape after almost a year without playing together.

The ultimate goal, however, is to forge the Super Eagles into an excellent unit capable of winning the 2022 African Cup of Nations in Cameroon as well as reaching the quarterfinals of the 2022 FIFA World Cup in Qatar, says the football chief.

The three-time African champions are billed to square up against Ivory Coast and North African giants Tunisia in Austria next month.

These are tune-up games arranged to get the Nigerian team back together ahead of their double-header qualifying ties versus Sierra Leone in November, postponed in March due to the outbreak of the coronavirus pandemic.

Rohr’s side has not played a game of football since lashing Lesotho 4-2 last November, but confidence in the team is at an all-time high.

Nigeria have one of the youngest, most exciting, and most valuable squads on the continent, thanks to the talents of Napoli’s Victor Osimhen, Villarreal’s Samuel Chukwueze, and Leicester City’s Wilfred Ndidi, among several others.

And Pinnick is assured that the Super Eagles have the resources to lift the next edition of the AFCON and go beyond the Round of 16 at the World Cup.

CHECK IT OUT:  Olakunle Churchill Gifts N1million To A New Baby (You Won’t Believe Why)

“It will be the same youthful, discipline, passionate and patriotic team,” Pinnick told The Sun News of the Super Eagles team Nigerians are to look out for in Austria.

“It is going to be with new players we are trying out now, but our goal is basically to win the Nations Cup.

“We will not only qualify for the World Cup but also surpass our previous records. We are bringing up a very new dynamic great team. That is the motivation for playing two international friendly matches.

“They are in every ramification two big games to put us in match killer mood to the important qualifier away game against Sierra Leone. We will use it to end the year,” he revealed.

Genk’s Cyriel Dessers and Cologne’s Kingsley Ehizibue are expected to join the Super Eagles for the first time in Austria.

At the same time, regulars such as William Troost-Ekong, Oghenekaro Etebo, and Moses Simon should make up the bulk of Rohr’s list.