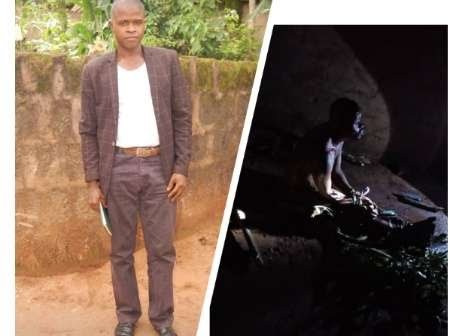 Terrible incidents keep happening on daily basis, in Nigeria. This story is really a sad one, NaijaCover Reports.

According to reports Reaching NAIJACOVER DESK, A man that leaves in Okpunoeze Uruagu, Nnewi in Anambra State, identified as Mr. Emeka Ezimmadu has slaughtered his mother and two children.

Reports also gathered By NAIJACOVER, That Emeka Ezimmadu, is an ordained prophet of Sabbath church. On Thursday being 17th, September 2020, he mysteriously brought out a Cutlass and started cutting his mother and his four children to death.

However, alarm was raised by the neighbors around and the vigilante group of Okpunoeze came for immediate intervention. Mr Emeka was further prevented from cutting his wife and remaining two children that are in the compound, NaijaCover Reports.

According to family source, Who Notified NAIJACOVER, The mother and two children were confirmed dead, and two of his children have been rushed to hospital. They are struggling for survival.

Nevertheless, the case has been reported to Nnewi division police force. And some people of Okpunoeze community believes that Mr Emeka was doing all that in the influence of the evil spirit.

See More Graphic Photos As Obtained By NAIJACOVER Below: CHECK IT OUT:  Nollywood Actor Shot Dead Along With A Lady (Photos)