Former Super Eagles Star Explains Why He Failed To Shine In The Bundesliga - NaijaCover.Com
Skip to content 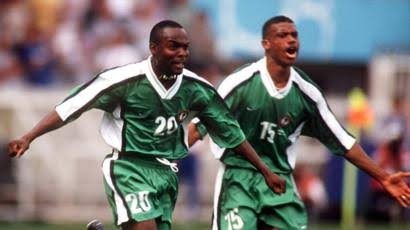 Several Nigeria internationals, including Sunday Oliseh, Austin Okocha, Benedict Akwuegbu, and Victor Agali all excelled in the German top-flight at their prime, but Victor Ikpeba has a different story to tell

Former Monaco star Victor Ikpeba admits that his two-year spell in the Bundesliga with Borussia Dortmund was a disaster because he suffered racist abuse and the loss of his beloved wife.

Great things were expected of Ikpeba when the then 26-year-old arrived in Westphalia in 1999. Borussia Dortmund paid 6.6 million euros to AS Monaco for the services of the 1997 African Footballer of the Year.

Ikpeba had led Monaco to the semi-final of the Uefa Cup in the 1996/97 season, finishing only behind Maurizio Ganz in the scoring stakes,

The Nigerian forward was also a pivotal part of Nigeria’s victory in the men’s football event at the 1996 Olympic Games, scoring in the astonishing semi-final comeback against Brazil.

But he failed to make a mark in Germany, scoring just three goals across 30 Bundesliga appearances and left under a cloud.

In an interview with Complete Sports, the Benin-born striker has revealed what went wrong in Germany.

“I can’t say I enjoyed a successful time with Dortmund in the Bundesliga because a lot of things came to play, you know,” Ikpeba said.

“I lost my dear wife, had issues with racism and some other issues. Things just did not work out well.

“However, one thing I do cherish was the fact that I was privileged to wear the black and yellow jersey of a great club like Dortmund. The fans were very sympathetic to my plight, which I really appreciated.

CHECK IT OUT:  “Mompha Is In Our Custody Over Alleged Fraud” – EFCC Confirms

“Looking back 21 years ago, I don’t have any regrets moving to the Bundesliga because, by the time I left Monaco, I didn’t have anything more to prove. I still had about three years on my contract with Monaco, but I decided to move to Dortmund because I needed a new challenge.

“It was not completely bad, though, but the numbers were not too great,” the ‘Prince of Monaco’ added.