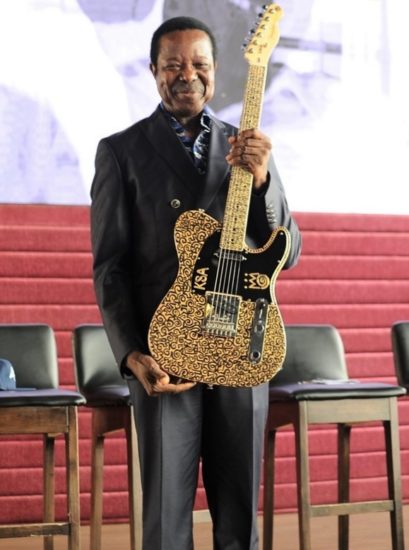 Legendary Nigerian juju singer, King Sunny, has turned 74. Born, Sunday Adeniyi Adegeye, the Member of the Federal Republic of Nigeria is a multi-award-winning singer, songwriter and multi-instrumentalist. He is regarded as one of the first African pop musicians to gain international success and fame.

He is known for his longevity in the Nigerian music scene, fluid dance moves, boundless stage energy and vast collaborative variety.

Born in Osogbo to a Nigerian royal family in Ondo and Akure, his father was a church organist, while his mother, Maria Adegeye (née Adesida), was a trader.

King Sunny Ade’s music is characterised by, among other instruments, the talking drum and the guitar.

His music is in the age-old tradition of singing poetic lyrics, ewi and praise-singing of dignitaries as well as components of juju.

He noted that he used these instruments not as an attempt to innovate, but as a substitute for traditional jùjú instruments which were too difficult to find or impractical for touring.

The pedal steel guitar, for instance, was added to his repertoire as a sound-alike for an African violin, Wikipedia states.

Also, his brief recordings with Island Records opened the floodgates for other world music artists like Senegalese Youssou N’Dour, Mali’s Salif Keita and many others.

In the 1980s KSA embarked on a career in Hollywood. His music was featured in the 1983 film Breathless, starring Richard Gere, the 1986 comedy; One More Saturday Night, and Robert Altman’s 1987 comedy O.C. and Stiggs.

CHECK IT OUT:  ‘My Fight With Salah Is Over’- Liverpool Star Mane Speaks Out