Man Arrested For Attempting To Kill Himself, 7-Year-Old Son Following Fight With Wife
Skip to content 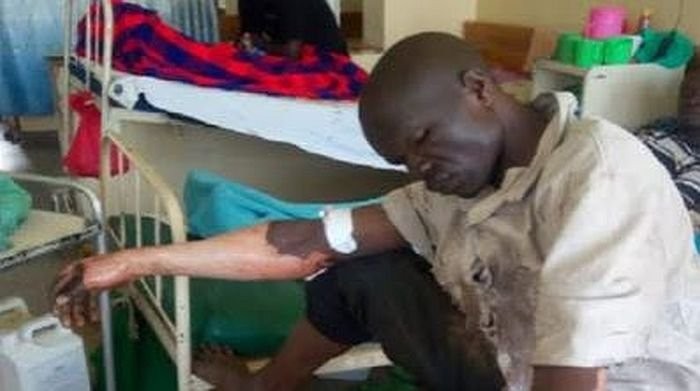 Posted By Udokabestluv On September 25th, 2020

The suspect attempted killing himself and his child to teach his wife a lesson for deserting them.

A 45-year-old man is receiving treatment at the Webuye County Hospital, Kenya after setting himself alight on Thursday, September 24.

Enock Indangalasi, a resident of Webuye in Bungoma County, is alleged to have wrangled with his wife, who fled her matrimonial home following the row.

Indangalasi is said to have, thereafter, bought petrol, which he drank and also ordered his 7-year-old son to ingest.

Afterwards, the suspect locked himself and his son inside their house, which he set on fire.

Neighbours, however, managed to put out the inferno and took the father-and-son to Webuye Hospital for urgent medical attention. The two had suffered serious burn injuries.

According to Indangalasi, he wanted to kill himself and his child to “teach his wife a lesson for deserting them”.

Webuye Hospital lead doctor, Simon Kisaka, told K24 Digital that Indangalasi is in a stable condition, whereas his (Indangalasi’s) son was referred to Moi Teaching and Referral Hospital in Eldoret for advanced medical care.

Police say they will charge the suspect with attempted suicide and murder after he is discharged from hospital.

CHECK IT OUT:  Is This The Port Harcourt Serial Killer? - Portharcourthawties Blog (Photos)