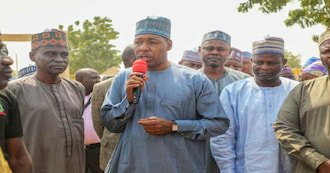 Multiple reports say the attack happened on Sunday, September 27, along the Monguno-Maiduguri axis of the state.

The attack occurred while the convoy of the governor was reportedly returning from Monguno, about 80km drive from Maiduguri, the capital of the state.

The report quoted journalists in the convoy as saying that tyres of some of the vehicles were affected by gunshots.

Other reports added that the windscreen of some of the vehicles in the convoy were shattered.

One of the vehicles affected was the one conveying the journalists, it was reportedly learnt.

It was further reported that no life was lost in the attack.