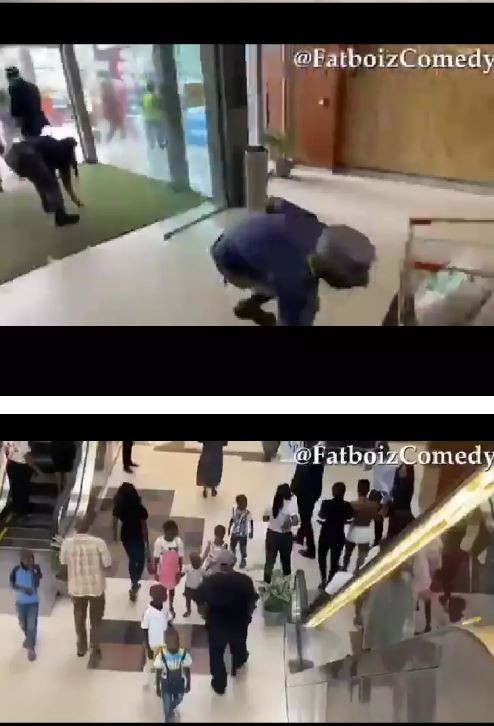 A video of a mobile policeman and security guards falling over themselves to pick money thrown by a diaper wearing comedian has left many having mixed feelings and reactions.

In the video, a comedian who owns and runs the FatBoiz comedy organization was seen in a shopping mall wearing nothing but a piece of adult diapers. The comedian had with him a girl who is believed to be his girlfriend.

People at the shopping mall were obviously amazed at the audacity of the comedian who appeared almost unclad. After the comedian had finished shopping, he began to throw dozens of naira notes into the air for the crowd.

As expected, the crowd went crazy and fought tooth and nail to pick up the money. Persons who had come to shop too were all over the floor, fighting to pick up a note or two.

The surprising thing was that the security guards at the mall who were supposed to prevent the pandemonium also jumped in, fighting for the money.

Another surprising thing about the incident that reportedly happened in Port Harcourt, Rivers State, is that a mobile policeman who was supposed to possibly have the comedian arrested for defacing the naira was also seen trying to pick up money.

Not only that, the mobile police officer went as far as running after the comedian’s vehicle and begging him to give him some money, at some point he was being pushed away by the comedian’s heavily built bodyguard.

CHECK IT OUT:  Side Chick Escapes Through Window After Lover’s Wife Came Knocking (Video)

Some persons have reacted to the incident, calling the policeman and his actions a national embarrassment. According to them, the policeman ought to have arrested the comedian as it is illegal to spray money in Nigeria. But obviously he had been blinded by the money being thrown around.