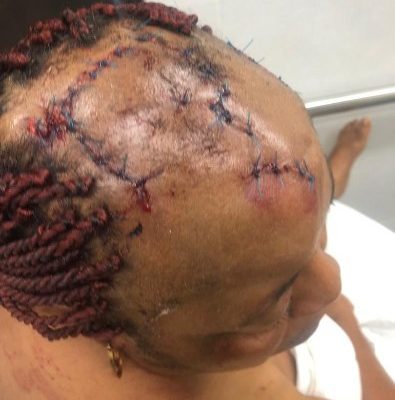 Posted By Udokabestluv On October 2nd, 2020 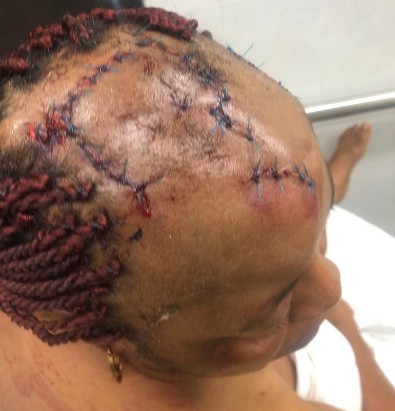 Loading...
A 59-year-old Nigerian woman identified as Maureen is currently in pain after her brother allegedly attacked her over their father’s property in Enugu state.

According to IgbereTV reports, the story was shared online by a Humanist group, Women’s Aid Collective WACOL, who said that the victim said their late father left the said property in her custody and made her promise to take care of the property and not transfer ownership to Mr Francis Egbujie. The victim however alleged that her brother has over time pestered her over the said property and demanded that she hand it over to him.

The group posted a picture of her battered head and wrote:

BROTHER ATTEMPTS TO KILL ELDER SISTER OVER FAMILY PROPERTY!!! On the 30th day of September 2020, WACOL legal clinic received a complaint from a 59 years old woman Mrs M, that her brother Mr Francis Egbujie from Ifu Ezike Udi, attempted to kill her by beating her with a stick and breaking her head over a family property.

She is currently receiving treatment at an undisclosed medical facility. She noted that together with her younger sisters they immediately made a report to the Trans Ekulu police station but rather than arrest the perpetrator Mr Francis Egbujie, the police detained her sisters and even threatened to arrest her.

She told WACOL that the property in question was handed over to her by their late father, who made her promise to take care of the property and not transfer ownership to Mr Francis Egbujie.

CHECK IT OUT:  Man Robbed And Shot Dead In Port Harcourt (Graphic Photos)

She also told WACOL that it is the proceed from the property that she uses to take care of their late elder brother’s children. Mrs M wants WACOL to assist her in getting justice and ensure that Mr Francis Egbujie faces the full wrath of the law for his devious acts against her.

WACOL has sent a petition to the Honourable Commissioner of Police, Enugu state requesting for a transfer of the case from the Trans Ekulu police station to the state CID for proper investigation.

WACOL will also provide palliative and support her treatment.”