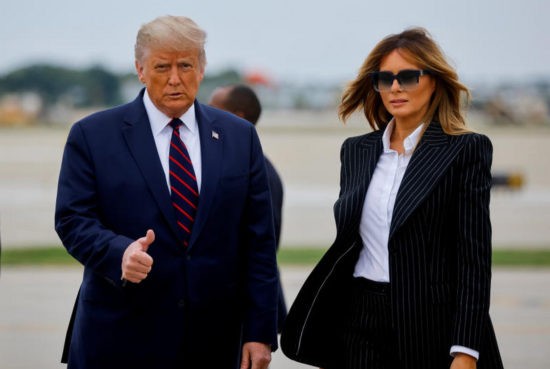 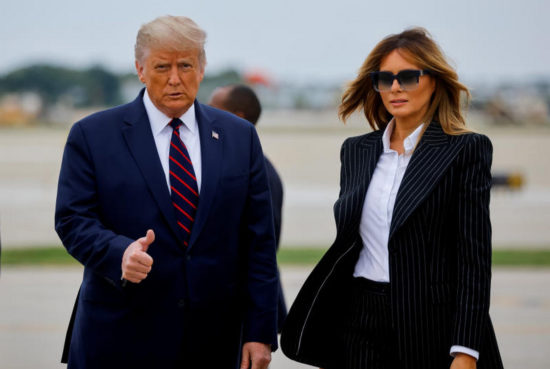 President Donald Trump has announced that he and first lady Melania Trump have tested positive for Coronavirus.

The announcement came after Hope Hicks, one of the president’s closest senior advisers tested positive for the virus on Thursday October 1. This made her the highest-profile member of the administration who is in frequent contact with Trump and other top officials to contract the virus.

In a tweet shared on Friday morning, Trump wrote;

Tonight, @FLOTUS and I tested positive for COVID-19. We will begin our quarantine and recovery process immediately. We will get through this TOGETHER!

Tonight, @FLOTUS and I tested positive for COVID-19. We will begin our quarantine and recovery process immediately. We will get through this TOGETHER!

Trump was last seen in public on Thursday afternoon returning to the White House after a fundraising trip to New Jersey. He did not appear ill, though did not speak to reporters as he walked into his residence.

In a memo issued to reporters around 1 a.m. ET, the President’s physician, Navy Commander Dr. Sean Conley, wrote he received confirmation of the positive tests on Thursday evening.

“The president and first lady are both well at this time, and they plan to remain at home within the White House during their convalescence.

“Rest assured I expect the president to continue carrying out his duties without disruption while recovering, and I will keep you updated on any future developments.”

After announcing the President’s diagnosis, the White House issued a new schedule to reflect several canceled events, including a fundraiser in Washington and a campaign rally in Florida.

CHECK IT OUT:  Kaduna Housewife Drags Husband To Court For Starving Her Of S*x

Mr. Trump has refused for months to wear a mask in public on all but a few occasions and repeatedly questioned their effectiveness while mocking Mr. Biden for wearing one. Trailing in the polls, the president in recent weeks increasingly held crowded campaign events in defiance of public health guidelines and sometimes state and local governments.

As of October 1, more than 7 million cases have been confirmed in the U.S. There have been more than 205,000 deaths.

The post President Trump and Melania test positive for Coronavirus appeared first on .