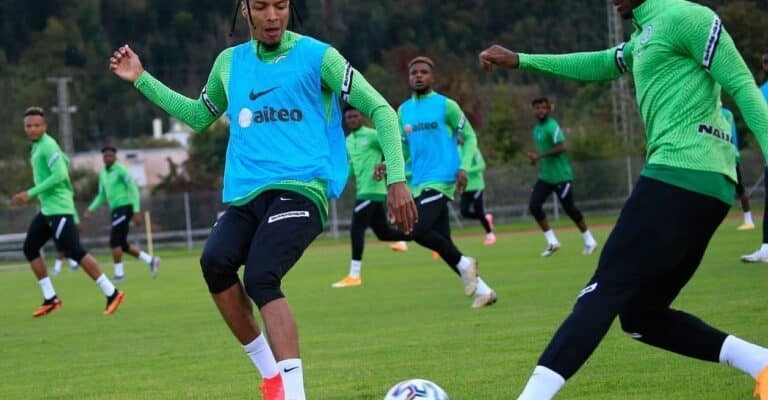 The Super Eagles succumbed to a narrow defeat in their first-ever friendly face-off with the Fennecs, but the performance did not sit well with a large section of the Nigerian fans

Algeria confirmed their superiority over the Gernot Rohr-tutored Super Eagles after a Ramy Bensebaini effort in only the sixth minute of play earned the African champions their second consecutive victory over the West Africans.

But it was the Foxes who started the game on the front foot and deservedly scored the game’s opening goal after the Nigerians failed to clear their lines from a corner kick.

It was not all gloomy for the three-time Afcon champions, though, as Sparta Rotterdam’s Okoye had a near-perfect night between the goalposts while Rangers’ centre-back Leon Balogun was solid in defence.

Overall, however, the Algerians looked the better organized of the two sides and reaped the benefits of a bright start.

Nigerian fans have not taken the friendly defeat lightly, though, and many have worded their displeasure at the Super Eagles poor performance on micro-blogging site, Twitter.

There was no positive.
Terrible game.
Onuachu, iheanacho, Musa, iwobi, Simon had no business on that pitch

The most boring and useless match i hv watched in awhile. The result was expected and both teams were below standard. We played rubbish total nonsense.

A terrible performance.
We couldnt string passes together, the midfield was lost, the attackers couldn’t attack. I know it’s a friendly but ffs that was terrible.

Rohr is a joke! His selections are a head scratcher and he does not know how to coach attacking style football. We have no system and it’s coaching

Maduka Okoye was the only bright spark, he kept us in this game if not the scoreline would have been embarrassing.

Onuachu lacked confidence could play the expected hold up play role that would have brought others in to play. Next up Tunisia. Here we go. Up Nigeria. E go better

Head coach of the Nigerian side Rohr has, however, chosen to pick the positives from the game as his men prepare for another friendly meeting with former African champions Tunisia on October 13.

CHECK IT OUT:  LET’S BE HONEST!! Is It Time For Man United To Sack Ole Solskjær?