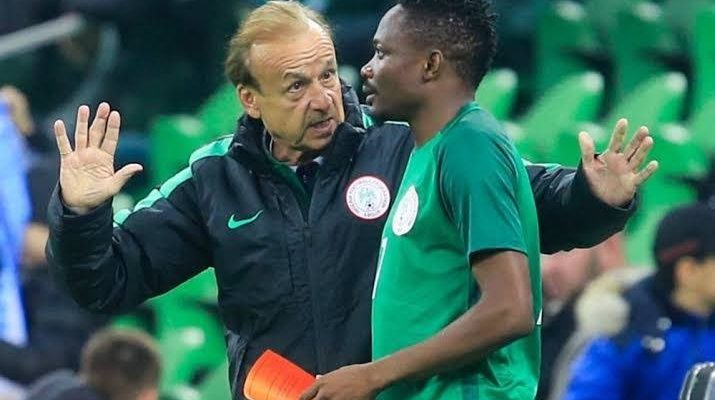 Ex-Green Eagles star Felix Owolabi has planted the blame for Nigeria’s second consecutive defeat to Algeria in Klagenfurt at the feet of head coach Gernot Rohr.

The Super Eagles were without the talents of Napoli forward Victor Osimhen, Galatasaray’s Oghenekaro Etebo, and the injured duo of Wilfred Ndidi and Jo Aribo.

Hoffenheim’s Kevin Akpoguma and Salzburg’s Samson Tijani also earned their first caps for the Super Eagles, as they were introduced in the second half of the encounter.

West Brom’s defender Semii Ajayi stood in for Ndidi in the midfield. At the same time, there were spots for regular faces such as William Troost-Ekong, Alex Iwobi, Samuel Kalu, and Samuel Chukwueze.

Still, Algeria dominated proceedings and triumphed on the day, thanks to Ramy Bensebaini’s sixth-minute poke-in after Nigeria failed to clear their lines from a corner kick.

The manner of the defeat, however, left Owolabi fuming with the former international blaming Rohr for starting the new Super Eagles invitees against the continental champions who are unbeaten in 18 previous matches.

“As a coach, you don’t bring in debutants in a match as the one against the Algerian side with a lot of experience even if it’s a friendly duel,” the 1980 Afcon winner told the Guardian.

“Such players are to be brought in gradually later on even if some of the regulars are absent through elimination by substitute. You don’t give debutants starting shirts.”

“I can tell you that it is not easy playing for this great nation either in a friendly game or real match situation. Every time the whole country expects victory always and nothing less.

“In that friendly against the Algerians, I wasn’t bothered about the result of the match, but the way the players approached it, which was unsatisfactory.

“I am not going to put the blame on the players this time around but solely on the coach who I think lacked the direction on how the team should play.

“The coach’s greatest mistake was that he did not give a sense of direction to the players on the field. I believed the dreaded North Africans overwhelmed the new players.

“You are playing against the African champions, and you fielded almost entirely new players, he added”

The Super Eagles can quickly put the defeat against Algeria behind them with a positive outing against Tunisia on Tuesday.