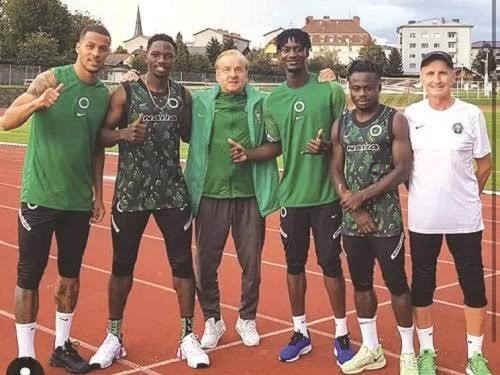 The Franco-German tactician has faced criticisms for his team’s lacklustre performance against the African champions, but a top football administrator sees no wrong done by the former Gabon coach

Chairman of the Kano State Sports Commission, Ibrahim Galadima, says Super Eagles head coach Gernot Rohr was right to invite new players to the national team while commending the former Bordeaux manager for starting some of the debutants against Algeria.

In a repeat of last year’s Afcon semifinal playoff, the Desert Foxes went away with a 1-0 victory courtesy of an early Ramy Bensebaini effort.

Without regulars like Victor Osimhen, Oghenekaro Etebo, and Wilfred Ndidi, the Super Eagles looked somewhat disjointed and bereft of ideas against the Afcon kings.

New boys Frank Onyeka, Zaidu Sanusi, Kevin Akpoguma, and Samson Tijani made their maiden appearance for the Nigerian national team, which also affected the team’s coordination against the Fennecs.

Felix Owolabi, a 1980 Afcon winner, has blamed Rohr’s unguided use of the debutants for Nigeria’s 10th overall defeat to Algeria while the former Gabon boss has also been bashed for his rigid approach to games.

But former Galadima, a former Chairman of Nigeria Football Association (NFA), has defended Rohr’s decision to assess new players ahead of qualification for the 2021 Africa Cup of Nations (AFCON).

“The idea of the friendly match was to exploit the benefit of a great abundance of players all over the world, Galadima said, as per the News Guru.

“The match was organised to test some players who have been invited into the national team, and we can all see that from the line-up.

CHECK IT OUT:  Reno Omokri Reveals One Major Thing Robert Mugabe Did For Zimbabwe

“So, it was an experimental game. It was not all about winning or losing. It was a friendly game. It has helped to show that we have good players both at home and abroad.

“These friendlies are designed to prepare the national team for the AFCON qualifiers and the 2022 World Cup qualifiers.

“Rohr will definitely call for more players because this is the building process of the team! and I believe they (players) will do better in their next match against Tunisia.”

Nigeria will next trade tackles with Tunisia before regrouping for an Afcon-qualifying doubleheader against Sierra Leone in November.