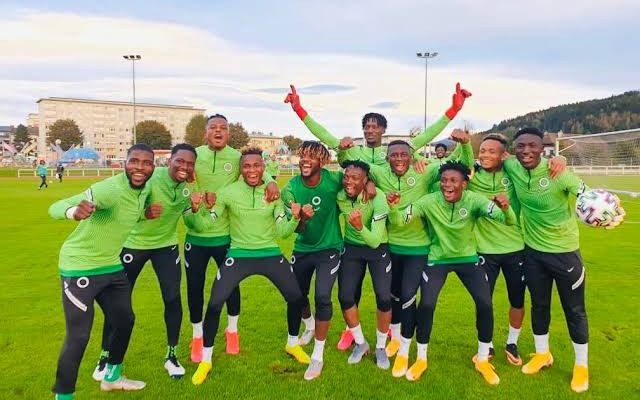 Gernot Rohr handed international debuts to six new players over the last two friendly matches, and one of them says it was a dream come true

CSKA Moscow winger Chidera Ejuke is delighted to finally make the progression to the Super Eagles, insisting that it is a dream come true.

It has been a long and sometimes uncertain journey to the top for the former Nigeria U17 and U20 star who failed a trial at Premier League club Liverpool only to excel at Valerenga after joining in 2017, scoring 15 goals across two seasons for the Eliteserien side.

A move to Heerenveen followed for the former Gombe United winger, a reward for his diligence and brilliance in Norway.

The 22-year-old blossomed in the Netherlands, securing his reputation as one of the Eredivisie’s finest goalscoring wingers after smashing in nine goals in his maiden campaign.

Still, he was ignored by the Super Eagles handlers until he signed for Russian giants CSKA Moscow this summer.

One goal in five appearances in the RPL finally convinced the head coach of the Super Eagles, Gernot Rohr, and Ejuke was handed his first call-up ahead of the friendly games against Algeria and Tunisia.

Ejuke made his Super Eagles debut in Tuesday’s 1-1 draw with Tunisia – replacing Samuel Chukwueze with 12 minutes to full time, a landmark moment that fulfills the dream of the youngster.

“It is a dream come true because it is something I have been hoping for and praying for to happen,” the 22-year-old told Omasports.

“To be honest, I’m not gonna lie, it almost like perfect timing for me. For it to happen this time, I’m really excited, and I give thanks to God and everyone who has been supporting this journey.

CHECK IT OUT:  Watch the moment Wizkid forgot the lyrics to his song while performing on stage (Video)

“For me, I can play in any role in the attack, but normally, I like to play as a left-winger, which is like my favourite.”

Ejuke will hope his 12 minutes cameo have impressed the Super Eagles coaches enough to invite him for future games, starting with the team’s Afcon qualifying doubleheader against Sierra Leone in November.