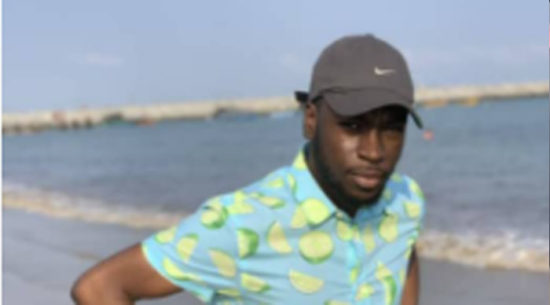 A Product Designer, Oke Obi-Enadhuze, who helped built a blood donation app for Life Bank Services, has been killed by a stray bullet just moments after tweeting, ‘Nigeria won’t end me’.

Obi-Enadhuze, who was a fresh graduate of Computer Science from the Federal University of Agriculture, Abeokuta, was shot in his home located on St.Paul Street, Mafoloku, Oshodi area of Lagos State on Wednesday.

He had tweeted, “Nigeria will not end me,” at 1.54pm, according to a Twitter time stamp. 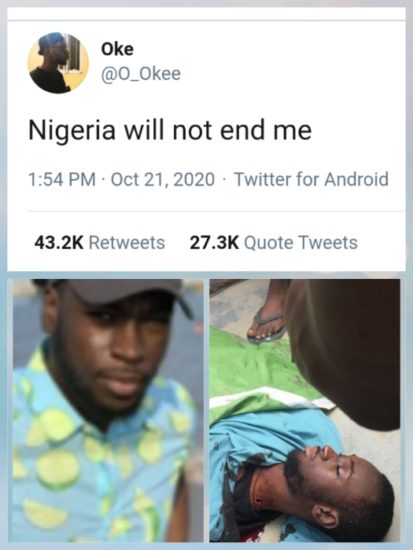 Although details are still sketchy, social media reports state that the deceased was killed by a stray bullet that emanated from the Makinde Police Station less than three hours later.

According to police sources, some thugs had gone to set the police station ablaze when cops began shooting into the air to disperse them.

“Makinde Police Division was burnt down by hoodlums, making it the 12th police station in Lagos to be attacked. In the process, policemen began firing shots. It is possible that one of the bullets hit the young man in the process,” a policeman said.

The deceased had done product designs for many companies including Sterling Bank, according to his LinkedIn profile.

A video of an old woman believed to be his mother clinging to his dead body and wailing has since gone viral on social media, with many demanding justice.

#RIPOke was trending on social media on Wednesday evening as friends and relatives paid tributes to the deceased.

@Jaiye_wuraola tweeted, “Oke was one of the best students at Bosworth College International. He was the head boy while I was the head girl. Such an upright man with good morals and extremely intelligent now he is dead. This is too much. RIP Oke.”

CHECK IT OUT:  Baby Mama Needed – Omashola Says As He Shares Photos With Cute Son

The Chief Executive Officer of Life Bank Services, Temie Giwa-Tubosun, said the deceased was the one who helped design the app used for ordering blood donations.

“He designed our blood donor app- the messages you get from us. He designed it all in just four days. He was a genius. He was also kind of shy and so sweet. Oke Obi-Enadhuze.

“This is too much to bear. He was a baby. You have taken him from his mother and all the people who loved him. It is too much. We cannot bear it. We all used to sit around one single table at CcHub day in, day out working on life bank. He was a believer.”

A young lady, who posted several photos of the deceased, said they had been dating and had made plans to get married.

“We had forever to go,”@derinmama tweeted.

The post Blood Donation App Builder Killed 3Hours After Saying ‘Nigeria Will Not End Me’ (Pix) appeared first on .