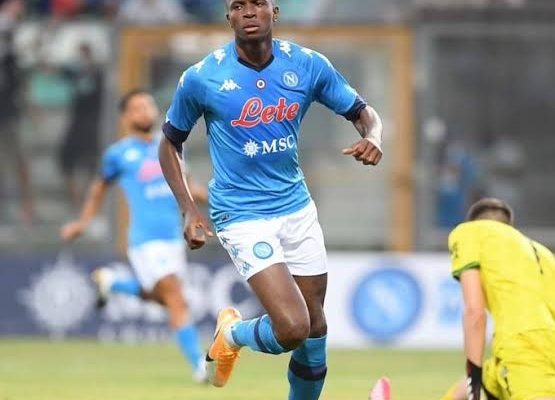 Osimhen joined Lille mid-last year and quickly showed what he was about with a brace on his Ligue 1 debut in a 2-1 defeat of Nantes.

The Super Eagles striker scored twice again in Lille’s next home game, a 3-0 victory over Saint Etienne, and was also on the scorer’s sheet when Galtier’s men hosted and downed Angers.

Seven goals in Osimhen’s first five home matches in France quickly set him apart as a star in the making, and it was no surprise when he made a big-money move to Italian giants Napoli this summer.

Lille then splashed €27 million – a club record – to bring in young Canadian forward David from Belgium, but the 20-year-old has failed to blossom in France.

The former KAA Gent forward is yet to score a goal or assist in his first seven league games for Lille, and the club’s boss says the youngster is incomparable to Osimhen.

“I trust Jonathan David. His partners trust him. There are players who integrate quickly. Last year, it was Victor (Osimhen). This year, it’s Sven (Botman),” Galtier said, as per MadeInFoot.

“It’s a little more difficult for Jonathan. He knows it. He’s a scorer. A scorer who does not score can fall into doubt. There is a whole collective work to be done for him.”

CHECK IT OUT:  Rivers Governorship Election Updates By Governor Wike

Osimhen already has a goal, and an assist in three Serie A matches for Napoli, with his club winning three of their league matches so far.