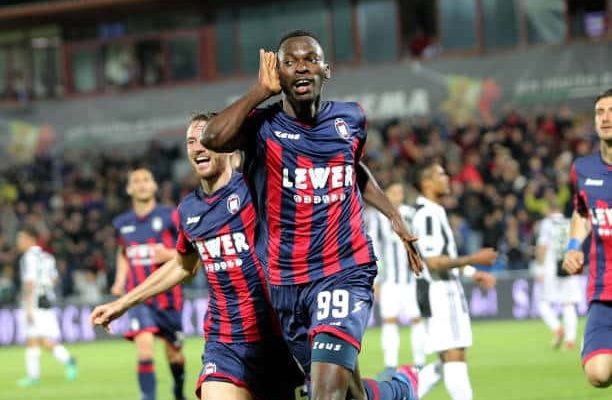 The Nigerian was impressive, but Crotone are still searching for their first win since returning to the Italian top-flight after they were beaten by Cagliari on Sunday afternoon

Simi Nwankwo featured for Crotone, but despite his best efforts, it was not enough to prevent I Pitagorici from losing 4-2 to Cagliari.

The former Super Eagles star was one of the few shining lights in what was a disappointing afternoon for Crotone.

The Islanders then turned the tie around after Giovanni Simeone put them ahead in the 35th minute. Simy, who was mostly unplayable, had the chance to level scores for Crotone, but he failed to connect properly with a cross from the right.

Nonetheless, Crotone drew level two minutes from half-time through Salvatore Molina’s shot for distance. But their joy was shortlived as Riccardo Sottil restored Cagliari’s advantage on the stroke of half-time.

It got worse for Crotone after the break as Luca Cigarini was sent off for a second bookable offence. But they could’ve levelled scores through Simy, who beat a Cagliari defender with an excellent first touch, but Alessio Cragno, in Cagliari’s goal, punched away his shot.

Crotone would later rue that opportunity as Cagliari added a fourth courtesy of a Joao Pedro’s close-range finish in the 84th minute.

It was the last goal of the match as Cagliari moved up to 10th while Crotone remained bottom of the log.