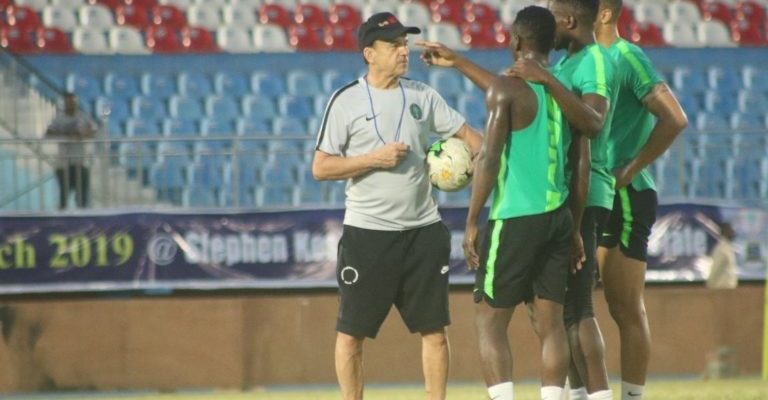 The head coach of the Nigerian national football team, Gernot Rohr, invited 24 players for the country’s double-headed showdowns against Sierra Leone next month, with a few notable omissions

Ajayi has been one of Nigeria’s brightest shining light in Egypt, having helped Al Ahly lift four league titles since joining the Red Devils in 2016.

The 24-year-old attacker is currently enjoying one of his most productive campaigns in Egypt, notching 11 goals in 42 games, and on the verge of winning his first domestic treble.

Al Ahly are still in the hunt for the CAF Champions League title, where they will face the winner between Zamalek and Raja Casablanca in the final. They also have their eyes set on the Egyptian Cup, having already secured another league title.

Yet Ajayi has found it hard to add to his single cap for the Super Eagles, which he earned in a 2-0 loss to Serbia in 2018.

Amunike, however, believes that the former CS Sfaxien man deserves a call-up.

“I believe that Ajayi deserves to be given an opportunity like every other player, and then it is up to him to take the opportunity,” Amunike told ESPN.

“He has been with Ahly for many years now, and he has been doing very well and playing at a high level consistently. I think that looking at what he has done with Ahly club, he deserves to be given the opportunity.

“It will now be up to him to make a statement that will convince the technical staff that he has something to add to the team,” he added.

CHECK IT OUT:  NL PREDICT!! Who Will Score First In Barcelona vs Real Madrid TODAY, @ 8pm (PREDICT & Win Free Cash)

“Ajayi deserves the Nigerian shirt. Compared to most of the strikers I have seen so far for Nigeria. He scores and can create chances for his fellow players,” Akpoborie explained.

“He is fast, and he is an all-round striker that scores goals from inside and outside the box. He will be a valuable asset for the Nigerian team,” he concluded.

Rohr has also ignored Anthony Nwakaeme, Paul Onuachu, and Cyriel Dessers, who scored in league matches played in Turkey and Belgium on Friday.