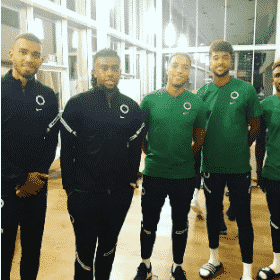 The Nigerian national football team will, in the coming days, face Sierra Leone twice in the qualifies for the 2022 African Cup of Nations

Genk forward Cyriel Dessers has expressed his disappointment at not making the list of Nigerian players preparing to take on Sierra Leone on November 13 in Benin City, with the return leg scheduled for Freetown four days later.

Super Eagles head coach Gernot Rohr invited 24 foreign-based stars for the back-to-back encounters, with as many as eight attackers named in the squad.

Despite smashing in three Serie A goals for Crotone so far this term, Simy Nwankwo was not considered for a call-up as well as Dessers, who has struggled since joining Genk from Heracles Almelo earlier in the summer.

The Belgian-born forward made his Super Eagles debut last month in the 1-1 draw against Tunisia and is unhappy that he could not follow it up with the Sierra Leone games.

“On not getting a call up for the National team for games against Sierra Leone, personally, I was not happy after knowing I did not make the cut,” Dessers told AOI.

“But then again, it shows I have to play more at club level and hopefully tries to always be at my best week in week out.”

Dessers bagged 25 league goals to emerge as the 2019–20 Eredivisie joint top scorer, but the former Utrecht star has only three goals in eight Belgian First Division A games.

Nigeria currently lead Group L with six points after victories against the Republic of Benin and Lesotho.